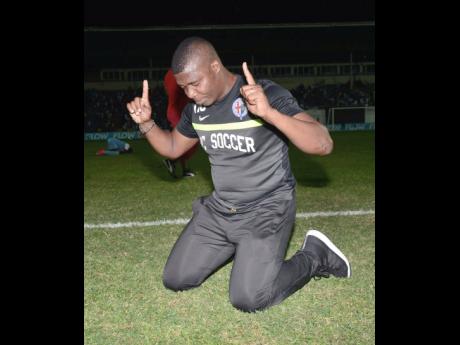 Ian Allen
Jamaica College (JC) Manning Cup football coach, Miguel Coley, goes on his knees as he gives thanks to the Almighty after JC defeated St George's College 1-0 at Sabina Park on Saturday to win the Manning Cup title for 2015 to make it their third year in a row.

Having pulled off a tactical masterpiece to edge high-riding St George's College 1-0 and win their third consecutive ISSA/FLOW Manning Cup - the competition's first three-peat in 48 years - Jamaica College's (JC) tried and proven coach, Miguel Coley, said their sensational win was his best yet.

Donovan Dawkins, who scored a semi-final brace against Denham Town High and who told The Gleaner he was confident he could score in the final, was the JC team's hero on the evening.

He glanced a brilliant header with his back turned to goal in the 88th minute to leave goalkeeper Cyle Elliott and sections of the Sabina Park crowd stunned, none more than the St George's team, who could not muster an equaliser in the remaining minutes.

The Old Hope Road-based institution is now the undisputed kings of Manning Cup by virtue of finishing the tournament unbeaten with two draws, and 27 titles overall.

Clearly overcome with emotions on Saturday, Coley reflected on his team's 4-0 drubbing by St George's as the catalyst for this victory.

"I just wanna apologise for the 4-0 Super Cup loss. We took our licks and bounced back. It was a tough game, George's is a fantastic team and we had to counter them with physical play and good man-marking. Team work makes the dream work," Coley reiterated.

JC were 4-0 losers in the Flow Super Cup and lost on penalties in the Walker Cup to Wolmer's Boys', who will play St George's College in that final.

JC meanwhile will contest the Olivier Shield final against the rural area daCosta Cup champions, with few betting against the possibility of the Corporate Area titans JC and George's finishing the season with two trophies apiece.