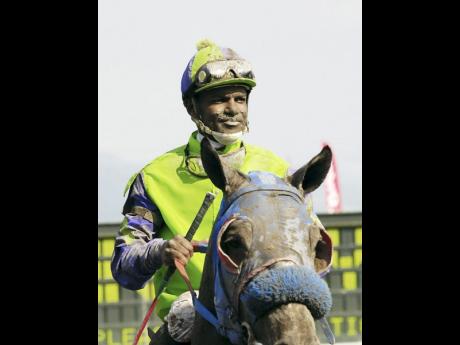 Jamaican jockey Andrew Ramgeet made all the headlines here on Saturday when he won both feature races on the day's eight-race card at Turf Paradise. Ramgeet captured the US$35,000 Queen of the Green Stakes with 22-1 outsider Hip Ninety Three in race three, before returning to steal victory in the Walter R Cluer Memorial Stakes, also worth $35,000, with favourite Az Ridge, in race seven.

The victory aboard Az Ridge was made even more memorable after the rider survived two moments of misfortune to battle to the wire and beat the three-year-olds and upward by a neck in a tight three-horse finish.

Going off as the punters' 7-5 choice in a mile trip, Ramgeet and the six-year-old bay gelding stumbled at the start to trail the field as 20-1 outsider Bourbon Sense posted the early fractions while chased by Ride Hard Kowboy.

However, Az Ridge made good progress and entered the stretch in contention with the front three. Ramgeet then rallied the gelding and despite losing his whip at the sixteenth pole, still managed to outlast his rivals.

Lewis Hamilton trailed home Mercedes teammate Nico Rosberg for the third straight time, as the German controlled the race from start to finish to win the season-ending Abu Dhabi Grand Prix yesterday. Starting on pole, Rosberg made no mistakes at Yas Marina to coast to his sixth win of the season and finish second in the overall championship with 322 points.

Hamilton had wrapped up the title with three races to go when he captured the United States Grand Prix in Texas back in October, to clinch his third World title and second consecutive. The Brit, whose paternal grandparents are Grenadian, finished on 381 points and said afterward he was glad the season was finally over.

"It's been a good year. I'm happy. I'm happy it's over, for sure. So now we can really enjoy," Hamilton told media. "I really have to take my hat off to this team who once again did an amazing job in building this car."