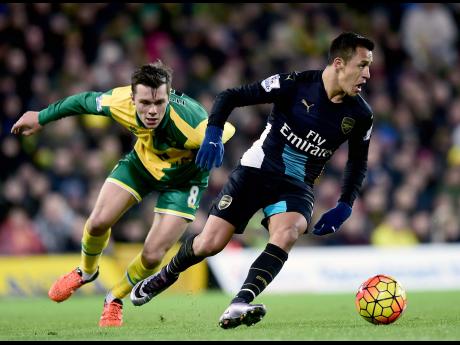 It's a sign of how dismal Chelsea's English Premier League title defence has been that Jose Mourinho called a draw at Tottenham the best performance of the season. A draw for Arsenal yesterday at Norwich, though, left Arsene Wenger experiencing the same old frustrations.

Yet it is Arsenal sitting fourth in the Premier League - only two points behind front-runners Manchester City and Leicester - and Chelsea are 12 points further back in 14th place.

With Diego Costa dropped to the bench and Eden Hazard deployed as a false nine in the striker's place, Chelsea left White Hart Lane with a 0-0 draw that at least gave the west London club three consecutive clean sheets in all competitions.

"We were the most dangerous team and we had the best chances," said Mourinho, the Chelsea manager. "When we play as a team and when, especially, we defend as a team, the team is much better. Playing the way we played, I wouldn't be surprised if in the next 10 matches we don't lose one."

Arsenal avoided defeat in drawing 1-1 at Norwich, but missed a chance to join City and Leicester at the top, having collected only two points from their last three games.

Arsenal were in a good position on the half-hour after Alexis Sanchez sent Mesut Ozil through to clip the ball into the net. But Lewis Grabban levelled before half-time after easily brushing off Gabriel Paulista's challenge in meeting Robbie Brady's through ball.

"It was a naÔve goal maybe," Arsenal manager Arsene Wenger said. "(Norwich) wanted it and they fought from the first to the final minute."

And Arsenal's injury list only lengthened. Defender Laurent Koscielny was replaced by Gabriel barely 10 minutes into the game. Forward Alexis Sanchez was forced off on the hour with a thigh injury. Midfielder Santi Cazorla has a knee injury and "played on one leg in the final part of the second half", according to Wenger.

"Overall, we are frustrated," Wenger said. "I think we were a bit jaded physically. You could see the penetration in the final third was not sharp enough, not incisive."

In east London, former Liverpool striker, Rickie Lambert, came off the bench at West Ham and took only five minutes to score to give West Bromwich Albion a 1-1 draw. The shot, which deflected off defender Winston Reid, cancelled out a free kick from Mauro Zarate.

West Ham is eighth and West Brom is 13th - three points ahead of Chelsea.