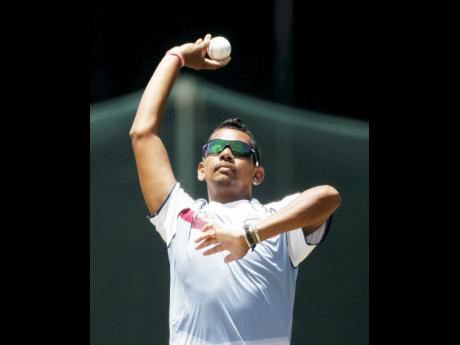 The career of beleaguered West Indies off-spinner Sunil Narine lay in tatters yesterday after the International Cricket Council (ICC) banned him from bowling in international cricket because of an illegal action.

The 27-year-old was reported following the third one-day international (ODI) against Sri Lanka earlier this month, and after undergoing testing at the Loughborough University on November 17, his action was found to exceed the 15-degree level of tolerance on "all variations of his deliveries".

Narine will be allowed to play in West Indies Cricket Board (WICB) tournaments, but will be forced to curtail all other international commitments.

He is currently campaigning in the Bangladesh Premier League, and will now have to abort his campaign for Comilla Victorians. He was expected to leave Dhaka last night.

"The International Cricket Council today confirmed that an independent assessment has found the bowling action of West Indies' Sunil Narine to be illegal and, as such, the off-spinner has been suspended from bowling in international cricket with immediate effect," the ICC said in a release.

"In accordance with Article 6.1 of the regulations, Narine's international suspension will also be recognised and enforced by all National Cricket Federations within domestic cricket events played in their own jurisdiction; save that, with the consent of the West Indies Cricket Board, Narine may be able to play in domestic cricket events played under the auspices of the West Indies Cricket Board.

"The assessment revealed that all variations of his deliveries exceeded the 15-degree level of tolerance permitted under the regulations."

Under ICC regulations, Narine can ask for a re-assessment once he has modified his action.

The development is a massive blow not only for Narine, but for West Indies, especially with the Twenty20 World Cup set to be played in India starting next March.

He had opted out of the 50-over ICC World Cup in Australia and New Zealand earlier this year, choosing rather to continue rehabilitation on his action, after running into problems last year.

Playing for Kolkata Knight Riders, Narine was first reported in October, 2014 during the Champions League Twenty20, and while he was allowed to continue playing, was reported again in the next game - the semi-final - and banned from bowling in the final.

Though he was cleared in March this year after undergoing tests at the ICC-approved Loughborough University, the Indian Cricket Board forced the Trinidadian to undergo additional tests at Sri Ramachandra University in Chennai before he was allowed to play in the Indian Premier League.

However, Narine was reported yet again for a suspect action during the IPL and subsequently banned from bowling off-breaks after an assessment of footage by the BCCI's suspect bowling action committee and following more testing at Sri Ramachandra University.

In May, he was cleared by the committee to continue bowling, but handed a final warning.

Narine is currently the leading bowler in both limited-overs formats of the game.