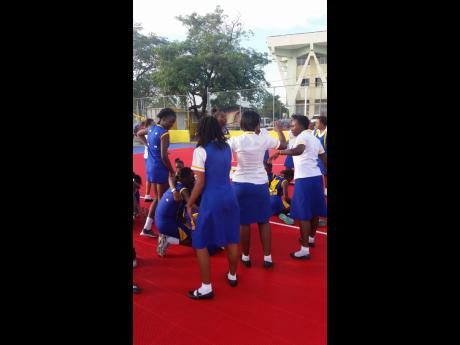 A new champion will be crowned in this year's urban area ISSA senior netball competition, as last year's winners, The Queen's School, were surprised by St Hugh's High, as the Roy Pryce-coached team squeezed out a thrilling one-goal win - 47-46 - in yesterday's semi-final at the Leila Robinson Court.

St Hugh's will face Camperdown High in next Tuesday's final, after the east Kingston-based institution ran out comfortable 32-24 winners over St Catherine High in the other semi-final.

Coming into the game as underdogs after losing to Camperdown two weeks ago in a second-round match, the St Hugh's team were under early pressure and trailed 14-9 after the first quarter, as Queen's goal shooter, Simone Gordon, was bang on target.

St Hugh's came into their own in the second quarter, as goal shooter Kadi-Ann Dehaney, using her height advantage, helped them reduce the deficit, even though Queen's still led at half-time, 23-20.

Queen's stayed ahead 36-33 after three quarters, but St Hugh's rallied, and with their defenders making good interceptions and Queen's committing careless turnovers, the Cross Roads-based St Hugh's scored five unanswered goals to lead 43-42.With Dehaney scoring easily, they held their nerves in the final two minutes to score a narrow win and make up for their loss in last year's final.

"After losing to Camperdown earlier in the second round, I had a meeting with my girls and told them that we would be going all out to take care of Queen's, and the difference would have been in mid court, and that was where we won the game today," said Pryce.

"A tough loss, but credit to St Hugh's," said Queen's coach Marvette Anderson. "Turnovers killed us as our girls made too many errors, and St Hugh's took better care of the ball."