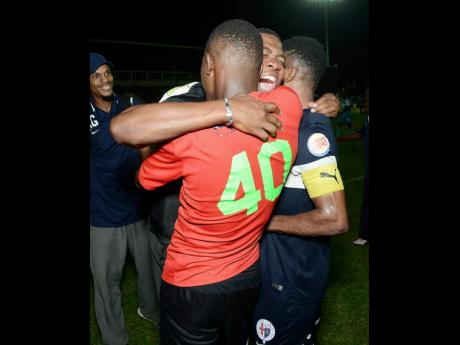 It would have taken nothing less than a highly motivated team, with some very inspired players, a great tactical plan and perfect game-time execution for Jamaica College (JC) to turn the tables on St George's College the way they did in the Manning Cup final.

This is the kind of dynamic convergence that generally occurs when a team with superior individual talent gets beaten by a team with less individual quality.

It was a lesson in tactical brilliance by coach Miguel Coley and the rest of the JC coaching staff.

After getting clobbered by an embarrassing four goals to nil in the FLOW Super Cup final, JC could have easily lost confidence and surrendered the psychological advantage. Instead, their emphatic response was commensurate with their status as champions.

I did an interview on radio with Coley on the eve of the final and asked him if he had a specific plan for the St George's number 11? Coley, I thought, pretended not to hear the question, so I asked him again, do you have a plan for the highly rated Alex Marshall, who basically destroyed JC in the Super Cup final?

Coley, this time, was deliberately evasive and expertly stuck to generalities while refusing to answer the question directly. It was obvious from then that a plan was indeed in place.

To nullify a dangerous striker, coaches generally employ one of two approaches: designate a man marker or cut off the supply line to the danger man. JC opted for the latter, and they did it brilliantly. Outside of the overall defensive discipline of the champions, as reflected in their tenacious tackling, marking and pressuring of the ball, the likes of captain Shevon Stewart and Gregory Messam Jr, the season-long supply line for the consistently brilliant Marshall, were rendered ineffective by the high-energy and aggressive JC ball-pressing in midfield, which left Marshall out of service and a mere spectator.

At one point in the game, Stewart came over to coach Neville 'Bertis' Bell and the television microphone picked up the conversation as the skipper quietly complained to the coach about the effort of some of his teammates. Coach Bell responded by saying, talk to them, but don't quarrel, just talk to them.

Crucially, for the entire 90 minutes, St George's were unable to conjure up any significant tactical response to the relentless aggression and efficiency of the JC approach.

During coach Miguel Coley's 100 per cent three-peat Manning Cup run at JC, one thing that they have done consistently is to peak and play their best football at the business end of the season. I have been cautiously sending out my warnings all year long that the wagon-filled STGC clan had better be wary of JC.

On the STGC side, I did detect an uncharacteristic touch of overconfidence from a couple of the television interviews, and who could blame them really, after St George's had so emphatically demolished JC two weeks before?

Certainly, for the first time that I can remember in his illustrious coaching career, Bell was outcoached in a Manning Cup final. That picture of him kneeling to congratulate Coley said more than a thousand words, as one of the oldest lessons in sport was reinforced in the 2015 Manning Cup final: Never underestimate the heart of a champion.