‘We are a dynasty’, says JC Principal at Manning Cup celebration 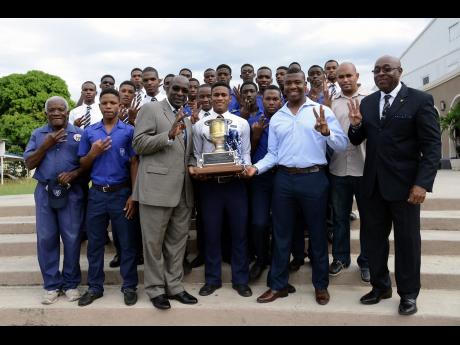 In what they charge to be the new home of their recently retained ISSA-FLOW Manning Cup title, three-time consecutive holders Jamaica College celebrated fervently at their morning devotion inside the Karl Hendrickson Auditorium at 189 Old Hope Road yesterday.

The victory was described as their sweetest, as administrative staff, players and well-wishers gushed, clapped, cheered and sang loudly.

"We gathered at the school a couple Mondays ago to do some reflection. The Griffin (JC crest) was wounded, but the Griffin has risen again," said principal Ruel Reid.

His team had recently been thrashed 4-0 by St George's in the FLOW Super Cup.

However, JC emphatically rebounded to defeat their rivals on Saturday courtesy of Donovan Dawkins' 88th-minute goal.

"This is one of my proudest moments as principal of this great institution. For 33 years, JC had not won the Manning Cup. Since 2007, we have been to seven semi-finals, six finals and won five championships," Reid said to resounding applause and cheers.

"We are a dynasty. We are gonna make history. It's gonna be a long, long, long time before anybody beats us," he warned.

"One College, the 'True Blue' College, has risen victorious," he added in obvious reference to the shade of similar colours among the combatants - with JC referred to as the 'Dark Blues' and St George's, the 'Light Blues'.

Amid the euphoric celebrations, captain Allando Brown paraded his team on the platform, where they held the trophy aloft.

Citing Psalm 136, Vice-Principal Rohan Wong told the audience: "Give thanks to the Lord, for he is good. His love endures forever.

"The Lord redeemed us in the final and gave us victory over St George's College. His love endures forever," Wong continued.

Michael Bernard, chairman of the school board, said: "No mishap can allow us to believe that St George's College was better than us. We have not lost a Manning Cup in three years. We are the defending champions. St George's lost two Manning Cup games this year before meeting us in the final. How could they be better than us?" he questioned, to rapturous applause.

Team manager Ian Forbes believes JC celebrated not only a trophy, but the emphatic way in which it was done, without losing a Manning Cup game since 2012.

"This is our sweetest one to date. Three straight hasn't been done in 52 years, and after being buried by a lot of persons, we found the resilience and determination and discipline to beat a team that many said were unbeatable," Forbes told The Gleaner.