Best of the best for super rich SVL Diamond Mile 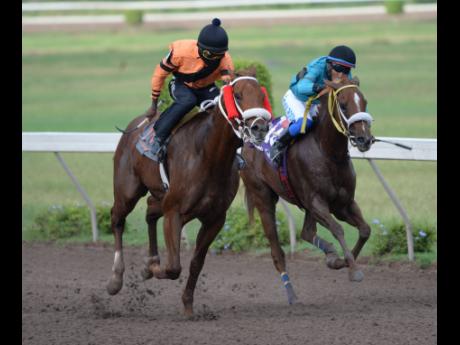 Jermaine Barnaby
SIR BUDGET (left), with Orlando Foster in the saddle, drives to the finish line ahead of REGALLY BOLD (Shamaree Muir) in the Restricted Allowance II event for NB 3-y-o NW2 over 1,000 metres at Caymanas Park on Saturday.

The richest ever race in the English-speaking Caribbean, the $13.5 million Diamond Mile, marks its inaugural running at Caymanas Park on Saturday with a star-studded field representing the top-16 earners in training expected to face the starter.

Sponsored by Supreme Ventures Limited (SVL) and conceived by the Betting, Gaming and Lotteries Commission, the grade-one event offers a whopping $6.5 million to the owner of the winning horse - a record. And if that wasn't enough, purse money will be paid to the first 10 past the post, an unprecedented move.

In all, 26 entries have been received, representing the top earners in racing and comprising the top 16 and 10 reserves in order.

Some of the really big names in racing will line up for this historic race, among them the 2013 Derby and St Leger winner, PERFECT NEIGHBOUR, one of six horses in the top 16 conditioned by 14-time champion trainer Wayne DaCosta.

Also down to run is the top imported horse, UPPA TUNE, one of three horses from the stables of veteran trainer Harry Parsard; stable companions PETE'SWILDONE and outgoing champion sprinter POTCHEEN, along with two-time Horse of the Year, TYPEWRITER, from the stables of Spencer Chung; stable companion COMMANDING CHIEF, this year's Derby winner; SEEKING MY DREAM from the DaCosta stables and the 2000 Guineas hero, ALI BABA, also trained by DaCosta; as well as the recent Burger King Superstakes winner, FRANFIELD, who is trained by Richard Azan and the consistent UNCLE TAF from the stables of Solomon Sharpe.

Among the reserves are the recent Coca Cola Invitational Mile winner PHINEAS, the November 14 Glen Mills O.J. Caribbean Sprint champion POKER STAR, the runner-up CAMPESINO and the vastly improved 3-y-o filly LONG RUNNING TRAIN, all of whom are unlikely to get in.