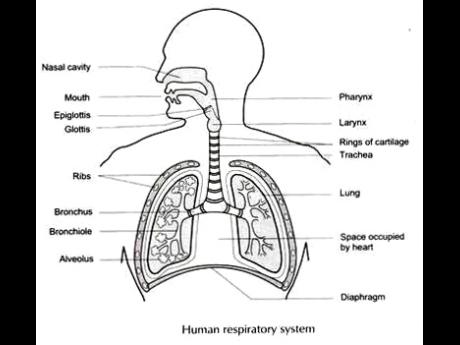 The respiratory system moves air into and out of the lungs, so oxygen can be taken into the blood stream and carbon dioxide released from the blood, into the lungs, and breathed out.

Breathing is also called external or pulmonary respiration, and must not be confused with cell respiration.

- The intercostals muscles contract, moving the ribs up and out and the diaphragm contract sand flattens.

- This increases the volume of lung and decreases the air pressure inside them.

- More air is sucked down the windpipe and into the lungs.

The following result in breathing out (expiration).

- The intercostal muscles and diaphragm relax, the lungs recoil to their original position.

- This decreases the volume of the lungs and increases the internal pressure above that of the external air pressure.

- Therefore the air is forced out of the lungs.

The amount of air we breathe varies with our demand for oxygen and the amount of carbon dioxide we produce. It is working muscles which use most of the oxygen and produce most of the carbon dioxide. At rest, an adult breathes about an average 16 times a minute. However, during exercise, the breathing rate can raise up to 90 times, or more, in one minute. The air sacs are very small but many, therefore the total surface area is very large. Each air sac is well supplied with blood, and oxygen diffuses from the air in the alveoli into the blood, and carbon dioxide diffuses out of the blood into the air in the alveoli, and exhaled out of the body.

Respiratory rate is the amount of breaths taken in one minute.

Tidal volume is the amount of air taken in or out in one breath.

Minute volume is the amount of air we can breathe in one minute.

Vital capacity is the largest amount of air that we can force out of the lungs after breathing in as deeply as possible. It is our maximum tidal volume and is usually about 4.8 litres in adults.

Residual volume is the amount of air left in the lungs after breathing out as hard as possible. This prevents the lungs from collapsing and is usually about 1.2 litres.

The total lung capacity is the vital capacity added to residual volume.

Lung capacity can differ with age, sex, body type and aerobic fitness (stamina). Maximum stamina or aerobic capacity (VO2 max) is the maximum amount of oxygen that can be transported to and used by working muscles during exercise.

Persons with high VO2 max can use much more oxygen than other people. They can work at higher rates for longer periods and will suffer less fatigue. The fitter the individual the better the VO2 max.

Whereas the purpose of breathing in and out is to supply the body with oxygen, and take away the poisonous byproduct, carbon dioxide, the oxygen breathed in combines with red blood pigment, haemoglobin, in the red blood cells, to form oxyhaemoglobin.

The oxygen is carried in the blood to all the tissues of the body. Oxygen is used by the cells of the tissues to release energy from food substances absorbed in the diet e.g. glucose.

Muscles need extra oxygen to get rid of lactic acid. This extra oxygen is called the oxygen debt. It is the amount of oxygen needed to get the body back to its resting state. This is repaid by breathing hard to take in extra oxygen after the activity.