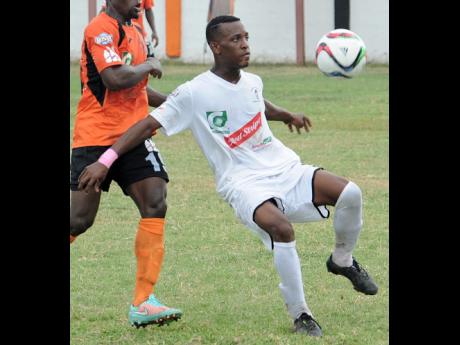 National hopeful Chevonne 'Messi' Marsh is hoping that with improved decision-making in the final third of the field and better composure he and his team, Cavalier Soccer Club, will achieve better results in the Red Stripe Premier League (RSPL).

The gifted player saw his chances of becoming the hero in the RSPL game between Cavalier and visitors Montego Bay United being dashed by the absence of those factors on Monday night. His intelligence and hard work opened up spaces for him and presented him with the two best scoring opportunities of the night for one team to win the game. Goalkeeper Jacomeno Barrett was, instead, the hero as he pulled off two lovely saves.

"It comes down to decision-making in the final third, and for me, personally, and the calibre of player that I am, I think I really should have executed and finished," the spent and disappointed player told The Gleaner at the end of the game.

"My team expects great things from me, so I really have myself to blame for not delivering and giving my team the three points this evening," added the former Calabar High School player.

On the first opportunity, the giant of a man Barrett was quick off his line and spread himself quickly to block the effort of Marsh, who went for power as opposed to guile.

"I was thinking of dribbling around him, but I saw the empty goal and decided to go for it and he made a brilliant save, and for that I have to commend him," Marsh said of the first missed opportunity.

Of the second one, he said: "I got tripped and was losing my balance. When I regained my balance, I overpushed the ball and it got too close to him, and with that I lost the opportunity," added Marsh.

The one point earned from the game prevented Cavalier from improving on their 10th place in the 12-team league, as they now sit two points behind the promoted UWI FC. That, for Marsh, is a difficult situation to be in.

"Not getting the three points and not improving our standing is not a great feeling. I feel overwhelmed that we were not able to execute and get the desired results as the coaches really worked hard.

"Scoring is our biggest problem and we just have to go back to the drawing board, and, hopefully, we will get better and better as the games go on. We have been getting the chances 'enuh', but we just have to make better decisions in front of goal," he explained.

Another area of disappointment for the ambitious player is that he did not send another message to the Reggae Boyz coaching staff about his readiness to go into battle with them.

"The national team is a dream of mine and the only way to get in is to perform, and I did not show my best this evening. I will not stop though, as I am just putting in the work and being patient and hoping for the best.

"I am feeling fit, I am happy, and I feel my time will come. I watched the last two Jamaica games and our performances were not the best, but the greatest thing is that we got the win against Haiti, which keeps our chances alive. Looking on, I said that the team really needs a player like me and we have other creative players here too, so I will keep working as the coach has been emphasising fitness," Marsh observed.

While he missed out on those two games, the presence of the local-based players only served to encourage him.

"I am encouraged by the fact that both Kevaughn Frater and Junior Flemmings, who like me play locally, got chances the last time around. So it tells me that the coach is looking and my time will come," he said optimistically.