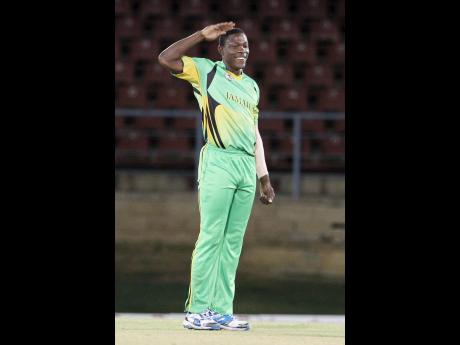 Fast bowler Sheldon Cottrell produced a five-wicket haul to help bowl out the Leeward Islands Hurricanes for 164 on the first day of their fourth round WICB First-Class Championship clash at Sabina Park yesterday.

However, at the close, the game was evenly balanced, as the Leewards, led by fast bowlers Azarri Joseph and Gavin Tonge, two

wickets a piece, had the Scorpions struggling at 69 for six.

The left-handed Cottrell, playing in his first game of the season following a foot injury, claimed five for 38, his third five-wicket haul at the first-class level, as the Leewards, after winning the toss, were blown away just before tea.

Only three Leewards batsmen offered any form of resistance.

They are returning wicketkeeper-batsman, Jahmar Hamilton, Jamaican-born Nkrumah Bonner, and opener Chesney Hughes, who is playing his first game since returning from county cricket in England.

Hamilton, after hitting six fours and a six, ended unbeaten with top score of 51, Bonner, stuck around for just over two hours for 35, while Hughes scored 25.

Jamaica reached 39 without loss in reply but then wickets fell quickly.

John Campbell was trapped leg before wicket by Cornwall for 29 and the innings went into a slide.

Campbell was followed two balls after by captain Paul Palmer, bowled by impressive 19-year-old Joseph for eight with Barbadian-born Kirk Edwards, zero, falling two overs later, bowled by Joseph, without scoring to leave the total at 44 for three.

Third match centurion AndrÈ McCarthy was next to go 10 runs later, caught at bat pad off Cornwall for seven, while former captain Tamar Lambert, after sticking around for 22 balls, was caught at slip off the bowling of Tonge for eight.

Wicketkeeper Carlton Baugh Jr and all-rounder David Bernard Jr, then tried to see out the final overs of the day with a partnership of 12 runs off 8.3 overs.

However, with the floodlights on - for the first time in a first-class fixture in Jamaica, and 1.1 overs to go, the latter was bowled off the inside edge by Tonge for six.

A Joseph c Palmer b Miller 4

A. McCarthy c Liburd b Cornwall 7