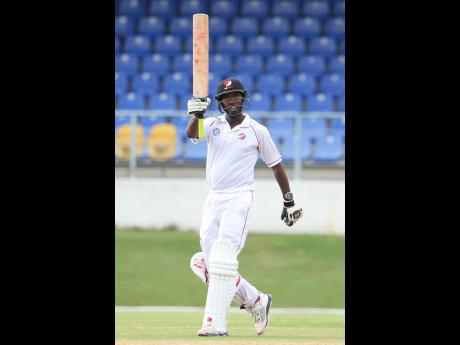 Opting to bat first at the National Stadium here, Pride finished the day on 233 for four with Corbin hitting a top score of 68 and Brooks getting 51.

Rookie Kemar Brathwaite fell just short of his maiden first-class half-century for 46, left-hander Jonathan Carter made 30 while Roston Chase was unbeaten on 27 at the close.

Off-spinner Dalton Polius claimed two for 30 to be the best Volcanoes bowler on show.

Needing to redeem themselves after suffering their first loss of the Regional First-Class Championship in the last round against reigning champions Guyana Jaguars, Pride got a great start from Corbin and Brathwaite who added 85 for the first wicket.

Corbin produced a patient innings, facing 197 balls in a shade under four hours at the crease and struck three fours while Brathwaite, in only his second first class game following his debut against Jaguars, counted three fours off 110 deliveries in 129 minutes.

AT QUEEN'S PARK OVAL: Guyana Jaguars, replying to Trinidad and Tobago Red Force's 210, were nine without loss in their first innings.