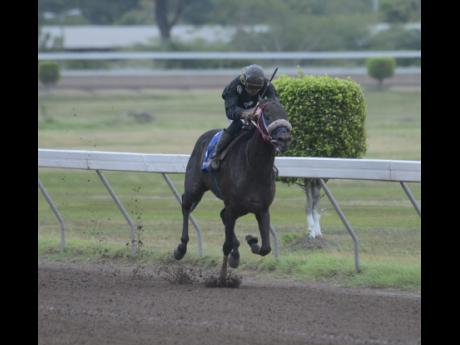 Today is a massive raceday at Caymanas Park. Millions of dollars are up for grabs - for trainers, owners and other stakeholders at the track.

Punters will not want to be left out. Many will be seeking their 'Christmas money'. With so much at stake, there will be surprises and several 'value bets' will be lurking under the radar.

Here are three which we think will be worth your while and may even ensure a merry Christmas, 20 days before the big day.

That race appears to have been just a warm-up for today's big day. On Wednesday, CRUCIAL VALOR showed he is in fine condition by beating stable companion TWILIGHT CITIZEN by a length (35.4 to 36.0) at exercise. TWILIGHT CITIZEN, on September 12, slammed maidens by six lengths and with just 51kg on his back CRUCIAL VALOR is the one to be on in the day's opener at 10:10 a.m.

BLACK BOY: AWESOME CAT is all the rage in the fourth race, but BLACK BOY will be tough. The latter got off the mark over today's distance on June 13 and was a winner less than a month later going 1400 metres. He has found the going tough among non-winners of three but today's distance is just what the doctor ordered.

Main rival, AWESOME CAT, was slammed by 13 lengths by SPORTING CLAY on October 31. On November 7, BLACK BOY was just seven lengths behind SPORTING CLAY and with a clear run today should reward backers at a good price.

CLASSICAL TRAIN: This is the one to be on in the last race. Forget her last two runs in the higher claiming group. The last time she was this low, and over this same distance, she won by a city block behind splits of 23.2x46.3. Nothing in this race can go that fast. Jockey Robert Halledeen rides the highly fancied PERFECT NEIGHBOUR in the Diamond Mile (Race 13) and he should be celebrating a fine double.