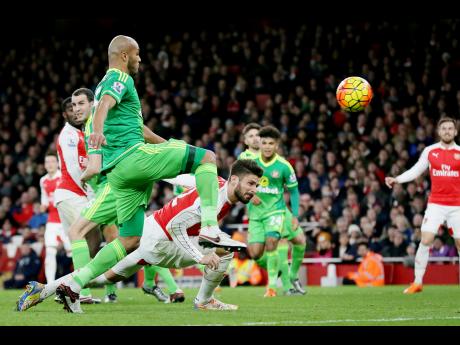 In a Premier League season where the usual narrative has been ripped up, there was no shortage of surprises yesterday.

The tone for the day was set by Manchester City collapsing 2-0 at Stoke and Leicester then seized the opportunity to go top of the league by beating Swansea 3-0.

Leicester were struggling to avoid relegation last season but now find themselves atop the standings the exact opposite of Chelsea's trajectory. The defending champions' season sank to a new low when they lost 1-0 at home to promoted Bournemouth, an eighth defeat in 15 league games that leaves them just three points above the relegation zone.

Glenn Murray scored an 82nd-minute winner after barely 90 seconds on the field as Bournemouth became the first Premier League newcomers to beat Chelsea since 2001.

"It must rank as the best individual result in the club's history," Bournemouth manager Eddie Howe said.

And it's been some history at 125-year-old Bournemouth, with the south-coast team coming close to being relegated from the fourth professional division in England and going out of business entirely over the last decade.

Embattled Chelsea manager Jose Mourinho maintained that the loss was undeserved and said the referee should have awarded a penalty before Bournemouth's goal when Simon Francis handled.

"We dominated the game but one refereeing mistake cost us," Mourinho said.

While no one expects Chelsea to be a relegation candidate, the team is now 17 points behind leaders Leicester languishing in 14th place, with Bournemouth only two points behind the champions.

Arsenal went to second by halting a three-game winless run with a 3-1 victory over Sunderland that saw Olivier Giroud score for both teams.

There was only one negative for Leicester. Jamie Vardy last weekend broke a Premier League record by scoring in his 11th consecutive match, but the striker missed out on equalling the all-time pre-1992 top-flight mark of 12 games.

Leicester's victory at Swansea will cast further doubt on the future of home manager Garry Monk whose team has taken only six points out of out a possible 33.

Leicester displayed the attacking swagger sorely lacking in City's performance at Stoke as Manuel Pellegrini's side went a fourth away game without a win in the league. Marko Arnautovic scored twice from Xherdan Shaqiri's assists as Stoke tore City apart.

"In this game we are playing with the same players in the last three games," Pellegrini said, bemoaning injuries to Vincent Kompany, Yaya Toure and Sergio Aguero. "Maybe it's the reason why we didn't play with the energy that we need to win."

Tottenham drew 1-1 at West Bromwich Albion after Dele Alli's opener was cancelled out by James McClean. Tottenham remain three points behind United the only team to beat the north London club in the league on the opening day.

Watford moved into the top half of the standings by beating Norwich 2-0 as captain Troy Deeney scored for a fourth consecutive game.