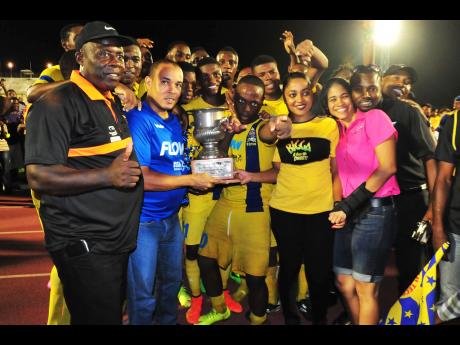 Neville Morgan's header in the 57th minute was enough to hand STETHS a 1-0 win. It's their second title in three years and their fifth overall.

Yesterday's defeat extended Dinthill's long wait for another hold on the coveted title. They last won the trophy in 1981.

The Montego Bay Sports Complex hosted the final, and as promised by the STETHS coach Omar Wedderburn, it was one to be remembered.

Prior to the match, the STETHS coach he really wanted to take this title after several early-season setbacks, and his players played like they were on a mission yesterday.

From the opening whistle STETHS enjoyed the majority of ball possession and it was clear that Dinthill's tactics of sitting deep in defence and allowing STETHS to attack would backfire in the end.

They came very close to opening their account in the 20th minute, when several attempts on the Dinthill goal resulted in a header crashing against the crossbar. The rebound was subsequently put over, as Dinthill breathed a collective sigh of relief.

That was STETHS's first real chance, but before that the danger man for Dinthill, Rodave Murray, had a half chance which he also failed to convert at the other end.

Just after the half-time break, it was time for STETHS's ace goalgetter Michael Kerr to show his worth and he nearly made Dinthill pay with a rasping shot that flew just wide of the far post in the 50th minute.

Dinthill's big goalkeeper George Brown then saved smartly, diving to his right to block another of Kerr's efforts with his leg to keep the scoreline even.

But with their opponents offering little in attack, STETHS struck. Morgan rose above the Dinthill defenders to head past Brown from a left-sided corner for the only goal of the final.

STETHS supporters invaded the field at the final whistle as they celebrated wildly.

Dinthill's only consolation is that they will still have the current team intact next year to mount another assault, and perhaps take that other step in lifting the title that keeps eluding them.