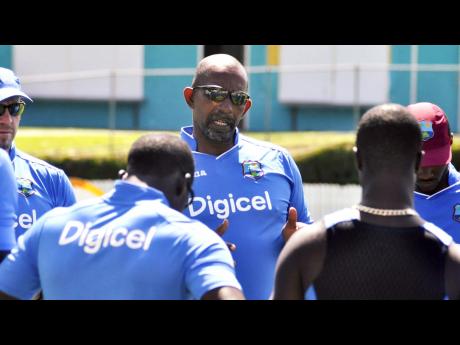 The West Indies are in Australia, and although the Australians are blooding some new players themselves, the West Indies, beaten and battered since 1995, are struggling along and fighting against the odds on a return to their glory days.

Since that day in 1995 when they bowed to Australia, they have been beaten by almost everyone, except by Bangladesh and Zimbabwe; they have lost 5-0, they have failed to qualify for the Champions Trophy, and their awesome fast bowlers and their brilliant batsmen of earlier times are now, for want of a better term, firing blanks, most of them.

No country, not England and certainly not Australia, who once ruled the roost, took this long a time to return to the top, or close to it.

Just recently, the West Indies team toured Sri Lanka, and despite Sri Lanka losing the services of batsmen Kumar Sangakkara, Mahela Jayawardene, and Tilikaratne Dilshan, as well as fast bowler Lasith Malinga, in spite of their confidence going in, they still failed to win a Test match for a 2-0, 3-0, and 1-1 result in Test matches, ODIs, and T20s.

And it wasn't any better in the ODIs where, in winning 3-0, Sri Lanka once scored 228 for two wickets while batting second.

The West Indies' only saving grace came in the T20 tournament which they drew 1-1 but suffered a heavy defeat when Sri Lanka ran up 215 for three batting first.

While Australia have remained strong or nearly strong all the time, the West Indies have got weaker and weaker, to the point where they are now ranked only above Bangladesh and Zimbabwe.

The West Indies, regardless of what they may think, are no longer the attraction they once were. Apart from the results of matches, their batsmen, their bowlers, and most of their fielders are no longer as exciting, as fast, as furious, as excellent, and as brilliant as they were once upon a time.

Once upon a time, particularly under Worrell, Sobers, Kanhai, Lloyd, and Richards, one was proud to be a West Indian, regardless of where in the world one found oneself.

Fortunately for the West Indies, their batsmen in particular, Mitchell Johnson has just retired, and Mitchell Starc is injured. It is, however, also a team packed with really good fast bowlers in Josh Hazlewood, James Pattinson, and Peter Siddle, plus Pat Cummins and Nathan Coulter-Nile.

As a West Indian, I hope I am wrong, and I pray I am wrong. It seems, however, based on the look of both teams, and although the Australian batting seems top heavy, that this tour of Australia will be another disaster, probably worse than 1975 when a team including Gordon Greenidge, Roy Fredericks, Lawrence Rowe, Viv Richards, Alvin Kallicharran, Clive Lloyd, Andy Roberts, and Michael Holding was massacred by Greg Chappell, Ian Chappell, Dennis Lillee, Jeff Thomson, and company.