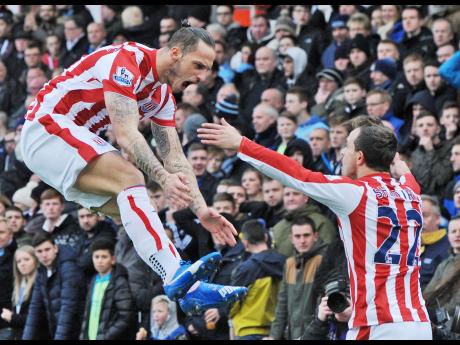 Arsenal ended a run of three games in the Barclays Premier League without a win to move into second place. Draws against Tottenham and Norwich and defeat at West Brom had threatened to derail the Gunners' title bid, but they responded when Joel Campbell finished Mezut Ozil's through ball. Olivier Giroud put the ball into his own net to bring Sunderland level, but the Frenchman responded with a goal at the other end before Aaron Ramsey's late third.

Glenn Murray's late header gave Bournemouth a famous win at Stamford Bridge and put more pressure on Chelsea manager JosÈ Mourinho. Murray's 82nd-minute winner moved Eddie Howe's side out of the relegation zone. They also became the first promoted side to beat Chelsea at home since Charlton in April 2001.

Having lost on their previous seven Barclays Premier League visits to Old Trafford, West Ham held Manchester United to a goalless draw - the first time these teams have drawn in Manchester since 1984. The visitors had the better chances in the contest, hitting the post twice in quick succession through Mauro Zarate, followed by Winston Reid's header.

Aston Villa were denied a first win in the Barclays Premier League since the opening day of the season. Oriol Romeu's equaliser earned Southampton a draw after Southampton were punished when defender Joleon Lescott turned in a corner. But the top-flight's bottom club, Villa, could not hold on as Romeu stabbed in a shot from a corner for the leveller.

Manchester City were knocked off the top of the Barclays Premier League by a vibrant Stoke City at the Britannia Stadium. Marko Arnautovic scored twice early on, with Xherdan Shaqiri creating both. Arnautovic nudged home Shaqiri's cross for the opener and then finished off a perfectly weighted through ball from his teammate to send City into third place for the first time this season.

Jamie Vardy failed to score for the first time in 12 Barclays Premier League matches, but a hat-trick by teammate Riyad Mahrez saw Leicester City back on top of the division. Mahrez headed the Foxes in front after five minutes and fired in calmly for his second, although he seemed offside. Swansea's Ki Sung-yueng headed against the bar after the break, but Mahrez finished an incisive counter-attack to seal his first-ever hat-trick.

Troy Deeney and Odion Ighalo both scored as Watford earned a deserved win over struggling Norwich. Captain Deeney converted a spot kick, his fourth goal in six games, after strike-partner Ighalo had been fouled by Alex Tettey. Nigeria's Ighalo, who gave Norwich's defence huge problems, added a second in added time when he slotted in his ninth goal of the season.

Tottenham wasted a chance to keep pressure on the Barclays Premier League's top four after letting a lead slip at West Brom. Mauricio Pochettino's side were ahead after 15 minutes when a Toby Alderweireld pass was converted by Dele Alli. But West Bromwich Albion levelled before the break when James McClean's header finished off a neat move.

Gorgi Wijnaldum earned Newcastle United an invaluable three points against Liverpool, with one shot deflected into the visitors' net for the first and a neat finish confirming the victory, only the Magpies' third of the season. Liverpool, who had won seven of their last eight games, were poor. Alberto Moreno was wrongly denied by an offside flag as Jurgen Klopp suffered a second defeat in 12 games.