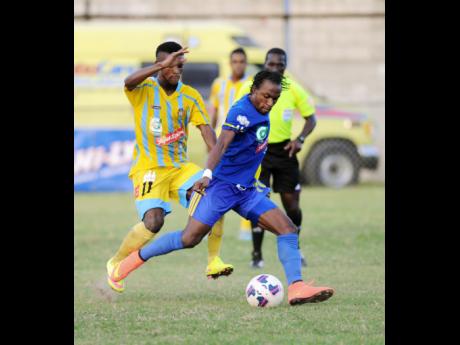 For the second time this season, Rosario Harriott's goal made the difference as Harbour View tagged eternal rivals Waterhouse 1-0 in their Red Stripe Premier League (RSPL) game at Drewsland yesterday.

In the first round, it was the former Portmore United defender's 71st-minute goal that gave the Stars of the East their first win of the season, and yesterday, his 49th-minute strike gave the Ludlow Bernard-coached team their first win in four games and pushed them to sixth in the standings on 21 points.

The defeat was Waterhouse's first in five matches. They are at the bottom of the standings on 13 points.

Harriott, a towering, overlapping full-back, was pleased to get the job done again against their arch-rivals.

"I feel great knowing that I played Waterhouse two times (this season) and I scored against them both times. These three points are very crucial because we needed to get to the 20-points bracket. Now we have a match on Wednesday (against Tivoli), and we can try and get closer to the leaders," he said

The player, who was recently called up to the national senior team, is enjoying one of his best seasons.

"It has been a good season. I am working hard, and the players have confidence in me. I just have to continue to work hard, continue to assist and, if the goals do come, continue to try and make use of them," he commented.

Waterhouse had the better of the first 30 minutes, with the best chance falling to Jermaine 'Tuffy' Anderson on 18 minutes. Harbour View also had their moments and came close through Mark Miller and Ranique Muir.

However, four minutes into the second half, Harriott put the visitors ahead when he bundled home John Ross Edwards' corner after he was left unmarked.

"Our finishing could be a lot better, but these three points will certainly go a far way in our quest for the championship," he said.

Meanwhile, Portmore (31 points) remain on top of the league after beating UWI 3-0 on a brace from Javon East. Montego Bay United (29) stayed second after Owayne Gordon's goal gave them a 1-0 win over Boys' Town.