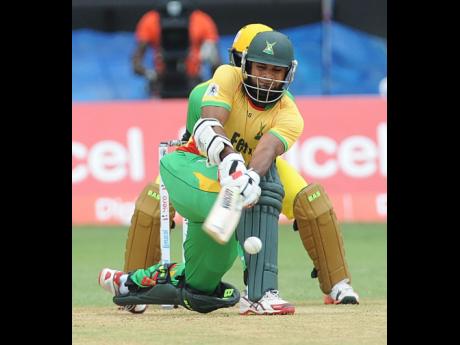 Opener Assad Fudadin says Guyana Jaguars' rampage through the WICB Professional Cricket League (PCL) after four rounds may prevent him from achieving his goals in the regional tournament this season.

Fudadin has set a goal of 1,000 runs, including five centuries for the season, but says the Jaguars' lopsided victories in the tournament are making it impossible for him to attain such a feat.

Fudadin scored 102, his fifth first-class century, to help Jaguars to a massive innings and 49-run victory over Trinidad and Tobago Red Force at the Queen's Park oval on Monday.

"When I began this competition, my goal was 1,000 runs and five centuries. With six matches to go, I still believe that is possible, but the way we (Jaguars) are beating teams by an innings will make that goal harder," Fudadin said with a chuckle during an interview with Kaieteur News.

Starting the final day on 52 for two, requiring a further 213 to make the visitors bat again, Red Force battled to 136 for two before suffering a sensational collapse to be bowled out for 216.

Jaguars have now vaulted clear at the top of the standings on 70 points after four straight victories.

"It feels good to get a hundred after so long. Alhamdulillah .... without God nothing is possible," said Fudadin, a devout Muslim who played Test cricket in 2012.

"I have been working hard on my game. I was batting well for a long time but not spending enough time at the crease to build big scores. I never doubted my ability to bat. It was not a technical problem but more of a mental one."

The talented left-hander has struggled to get starts in this season's tournament with scores of four and zero in the first round, five in the second round and nine in the first innings of the third round.

However, he found some form and confidence in the second innings against Barbados when he made 42.

"I did not spend much time at the crease in my previous innings in this tournament because I did not manage too many runs," said Fudadin, whose 102 was his first century since scoring 103 for West Indies 'A' against Sri Lanka 'A' October last year in Sri Lanka.

"In addition to perseverance, patience and self-belief, having a supporting family helps. My wife (Akeema) and friends are always there for me."