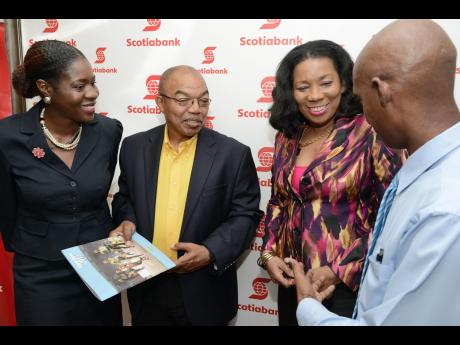 Rudolph Brown
Dr Warren Blake (second left), president of the Jamaica Administrative Athletics Association (JAAA), in discussion with (from left) Simone Walker, director of marketing, Scotiabank Group; Lana Forbes, director of sales, Scotia Insurance; and Garth Gayle, general secretary of the JAAA, at yesterday’s press briefing to announce the names of this year’s nominees for male and female Athlete of the Year. The press briefing took place at Scotiabank Centre in Kingston.

The awards will be handed out on Saturday at the Chinese Benevolent Association Auditorium starting at 6:30 p.m.

The announcement of this and other awards available to top athletes for their performances during 2015 was made at Scotia Centre in Kingston yesterday.

President of the Jamaica Administrative Athletics Association (JAAA), Dr Warren Blake, said the nominations for the new award will be criticised by some but argued that there were many great performances over the course of the year and they chose four of the best.

"At this time of the year like any good administrator you have to recognise the excellence of your support staff, and in this case our athletes have done us very proud at the junior and senior level," he said while listing the nation's athletic achievements for 2015.

"At the end of the day a lot of people are not going to be satisfied, as what they consider to be the performance of the year was not included," Dr Blake said while pointing the performance of Christopher Taylor who won 400 metres gold in record time at the World Youth Championships.

"There were so many great performances that some had to be left out,' he insisted..

Bolts, who also last won the award in 2013, has a very good chance of retaking it, with Parchment and O'Dayne Richards, the world shot put bronze medalist will be his rivals for the award..

Stephen Francis, Glen Mills and hurdles coach Lennox Graham are the coach of the year nominees.

Also, two to young athletes will be in line to receive the Howard Aris/Scotia scholarship, which will assist a male and female athlete in post secondary studies. The Howard Aris award will go to a junior athlete who has excelled in a non- traditional event.