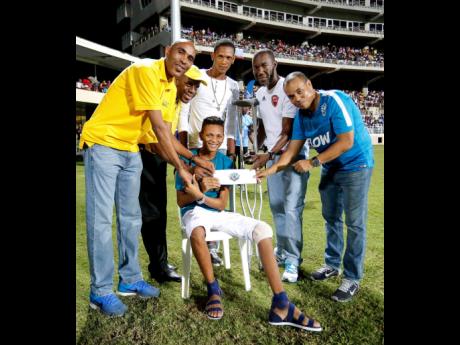 Outstanding Holy Trinity High School footballer Jordan Foote, who last Thursday had his leg amputated due to life-threatening bone cancer, is thankful to be alive, but his coach says he will need counselling to overcome the loss.

"He needs some professional help with counselling," his coach Devon Anderson said as the former schoolboy football star begins to cope with life as an amputee.

The coach, who admits he has been a driving force and like a father to the cancer-stricken player, is hoping to receive assistance with a prosthetic leg for his charge.

His leg was amputated five inches above the knee during surgery at the University Hospital of the West Indies last Thursday.

"We would like a prosthetic leg for him. I have been doing some research and for someone to come from Cuba to put it (prosthetic) on it will cost about $1.4 million. We would really like to put it out there so he can get assistance," Anderson told The Gleaner yesterday.

He added that Foote is now recovering at home, and it will take four to six months before his leg heals.

Organisations such as schoolboy football sponsor FLOW, the Inter-secondary Schools Sports Association and the Premier League Clubs Association had assisted the player with his recent surgery and Anderson is hoping the same generosity can come to his rescue again.

"He puts the best outside and puts on a brave face when he sees people, but deep down the loss is very hard to take," Anderson stressed.

Eighteen-year-old Foote made a name for himself as a Holy Trinity player last year in the FLOW Super Cup competition. They were surprise finalists and were beaten in the championship match by Jamaica College.