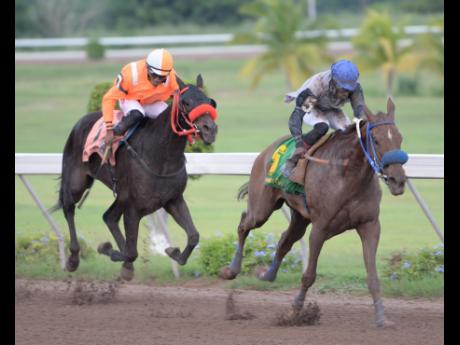 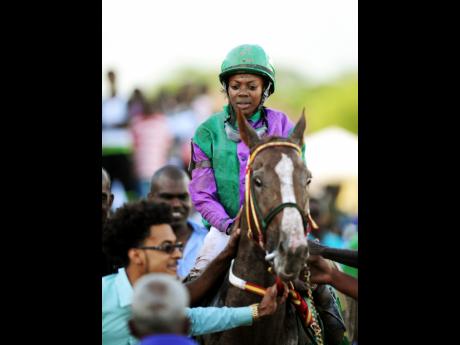 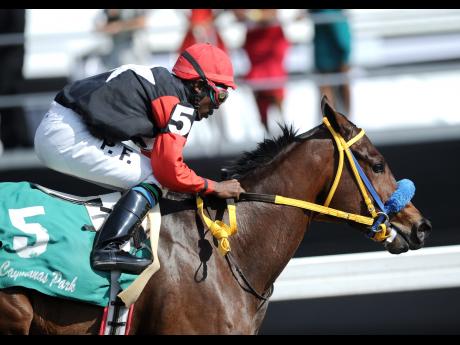 Tomorrow's Jamaica's Racehorse Trainers' Association (JRTA) 10-race programme at Caymanas Park offers a Pick-9 carryover of $2.7 million from race two to 10 and a $1.2 million carryover in the first Super-6 from race one to six.

The second Super-6, which starts anew with a guaranteed minimum of $750,000 will embrace races five to 10, including the JRTA feature over 1200 metres to be contested by the maximum 16 starters, the final race on the card.

We look at the first Super-6, which commences with the Dye Job Sprint over 1200 metres (restricted stakes) for native and imported two-year-olds. Seven starters have been declared, and from all indications, the unbeaten BLUE DIXIE, with former champion jockey Omar Walker riding for trainer Gary Subratie, should repeat.

The bay filly by Sky Mesa out of Dixieland Bull made a smashing debut over this trip on September 27, making all to win by nine lengths from BIG AL in 1:14.4. Having looked sharp at exercise since, BLUE DIXIE should win from RALLY BABY, an easy winner over the straight on November 18.

The recent winner BATIDOR DE MUNDO from the stables of Clifford Atkinson Jr holds the key to the second race (claiming $350,000-$300,000) over 1820 metres, despite the presence of PERSIAN BELLE, ABOVE THE RADAR, and GO GO TRAIN, all of whom have won over this trip in the past year.

BATIDOR DE MUNDO, however, has won three races over the distance lifetime and with the useful 4.0kg claiming apprentice AndrÈ Powell securing the ride, will prove hard to beat. Prior to his recent win over PERSIAN BELLE at a mile, BATIDOR DE MUNDO beat MISS BOSS LADY over this trip on a $350,000 claiming tag August 15 and back in action from the convenient mark of 53.0kg, should win from PERSIAN BELLE (Dane Nelson up) and GO GO TRAIN (Wesley Henry).

LAZZA, who has been knocking at the door, looks best of a moderate field of maiden three-year-olds in the third race over 1500 metres with Shamaree Muir aboard. There is not much good form present among the eight starters, hence LAZZA, who finished third to WELL BLESSED over 1200 metres last Saturday, has most appeal, ahead of MINY LEE, who is steadily coming along.

Bang in form FORCE DE JOUR won his seventh race from his last eight starts last Saturday, and despite running from a different barn (claimed), is definitely one to follow with competent Harleston Lewis aboard. The 4-y-o colt from the stables of Lawrence Freemantle has most to fear from old rival SUNLIGHT EXPRESS, both having finished first and second, respectively, over the straight on October 19 in the good time of 59.1. They should form the quinella.

The last two races in the first Super-6 should be won by BIGDADDYKOOL (Shane Ellis up) and NATSHADONTPLAY (apprentice Linton Steadman), who caught the eye last Saturday when a fast-finishing fourth to TOUCH DE ROAD over 1300 metres.

Their respective dangers are THE PROMISE LAND in the 2-y-o race and GENUINE FRIEND, who was second to TOUCH DE ROAD recently.