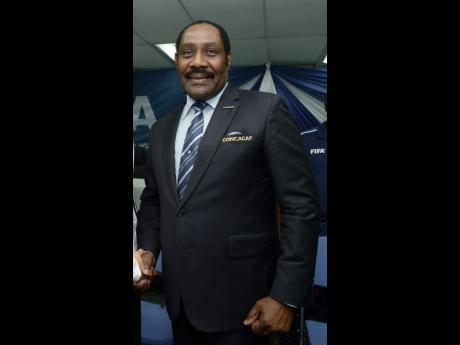 Jamaica Football Federation (JFF) president, Captain Horace Burrell, revealed that given the recent corruption investigations which rocked world football and threw the regional body into chaos following the arrest two former presidents, he is not keen to be head of CONCACAF.

Caymanians Jeffrey Webb and Alfredo Hawit have been arrested in football's ongoing scandal and another former CONCACAF president, Trinidad and Tobago's Austin 'Jack' Warner, has been implicated in the corruption probe, with a US extradition request sent to his Government.

The JFF boss, in the past, had declared his ambitions to assume the CONCACAF top job.

He was recently appointed to an interim CONCACAF body to govern the affairs of the region's football until a new president is elected at the confederation's next congress in Mexico City in May.

Give others a chance

However, Burrell now insists that to be president of two demanding associations would be time-consuming and challenging.

"Look at what people have been saying? So I won't hang around until I am thrown out," Burrell noted.

"Many people now want the post, so at times you have to step back and give others who have asked for the opportunity the chance to serve," he told The Gleaner.

"I have a business which I have built for many years, and it's time to start paying attention to that. After a while, you realise that you need time for family, business and other things," he added.

"I am not going to step back fully (from football administration), I will always be around. Right now, I am the JFF president and I am going back for another four years, as I have been nominated unopposed.

"That, in itself, is a lot of commitment and to give that commitment to the regional body is going to take up more of the time. So to hold both posts is a huge task.

"Right now, I am a vice-president of the organisation (CONCACAF), but to vie for the head would mean complete devotion, and with my federation, business and family, it would be very difficult," he explained.

The Jamaican said the focus is to rebuild the organisation's reputation and get reforms.

"We have collectively decided to remain as one strong body, to operate as a unit until next May when the election is due. This was a unanimous decision and we have been pursuing a number of reforms to make the confederation emerge stronger.

"We feel it is the right thing to do and we are certain that in the months ahead, things will return to normal and the confederation will be much stronger and transparent," he commented.

"This is a voluntary position and times may come when others want an opportunity and they should be given the opportunity. But at this time, I am just concentrating on working with the group, getting the reforms in place and passed by congress, so that when we go forward, the problems that we have experienced recently, the reform process will prevent a lot of these from happening again," he stated.