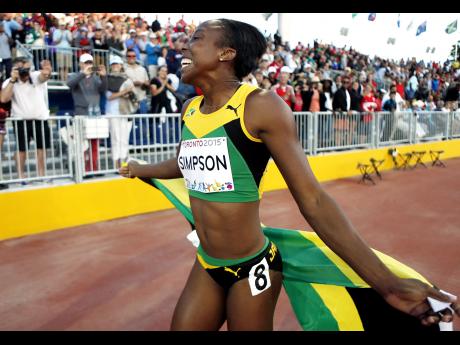 AP
Simpson in a celebratory mood after winning the women’s 100 metres final on July 22 at the Pan American Games in Toronto, Canada.

Awards are flying around the world in this festive season and, thankfully, some have come Jamaica's way.

Usain Bolt, Shelly-Ann Fraser-Pryce and young Christopher Taylor have gotten their share from sporting bodies and media organisations alike. There may well be more to come.

One oft overlooked category might include sprinter Sherone Simpson. When she came back from a minor drug suspension for unintentional use of a stimulant in 2014, she was a shadow of the woman who had been a mainstay of the Jamaican team for more than a decade. Her return to prominence is the comeback of the year.

An Olympic 100m finalist in 2004, Commonwealth 200m winner and world number one over 100 metres in 2006, joint Olympic silver medallist in the 100m in 2008, and repeat World Championship finalist in the 200m, Simpson has a portfolio many envy. Added to that, her speed and safe hands have made her a key member of the 4x100m unit that has become the best in the world.

Asafa Powell managed to regain his usual sub-10 form late in the 2014 sprinting campaign with victory over Commonwealth champion Kemar Bailey-Cole. Simpson, however, struggled and aborted her 2014 season early. It was painful to watch.

This year, with the guidance of coach Maurice Wilson, she gradually regained competitive form. Instead of the slouchy 2014 200-metre fourth place at the Jamaican National Championships, she looked more like her urgent self. A near dead heat with former MVP Club training partner Fraser-Pryce in the 200 metres at the UTech Classic heralded her progress. At this year's Nationals, she was a strong second-place finisher in the 200 metres, and a flying fourth in a fast 100-metre final.

Her 100-metre win at the Pan-Am Games was wonderful. Seizing the moment, Simpson produced a winning time of 10.95 seconds. It was her 13th sub-11 clocking and her first since 2008. Out in the 100-metre semis in the World Championships, the 32-year-old comeback kid reached the 200m final, where she ran a season's best time of 22.50 seconds and chipped in with a high-speed first leg to help Jamaica to reach the 4x100-metre final.

Her comeback would be perfect if the authorities would wipe her slate clean. After all, it's been proven that the company that supplied the tainted supplement that got her and Asafa Powell in trouble was guilty of incomplete product labelling. She and Powell sued the offending company and won an out-of-court settlement.

If the USA track and field association, USATF, can back Allyson Felix in her quest to run both the 200 and 400 metres at the 2016 Olympic Games, perhaps the JAAA can help our two heroes erase the blot on their reputations.

That, and an individual Olympic medal next year, would make Simpson's comeback complete. If she stays injury free, success is possible.

- Hubert Lawrence was making notes at track side when Sherone Simpson ran for Manchester High School at Girls' Championships 2002.