Hyatt the hero as Arnett surge 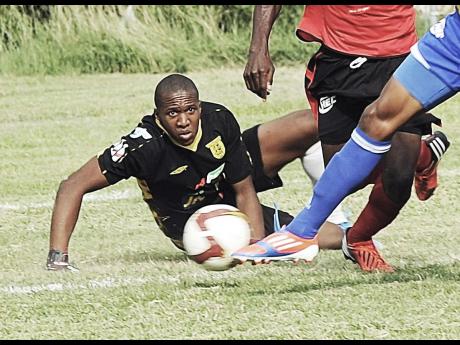 Goalkeeper Damion Hyatt was flocked by children, some of whom shook his hands, patted him and still others just tried to touch him while declaring their 'saviour' man of the Man of the Match.

Adults soon joined them and even club chairman, Dr Omar Davies, made his way to the middle of the field to congratulate him and shake his hands.

Moments earlier, the 30-year-old goalkeeper had pulled off a fine penalty save to give his team, Arnett Gardens, the three points and a place at the summit of the Red Stripe Premier League as they defeated former leaders Montego Bay United 2-1.

Arnett Gardens' 38 points inched them to one above the vanquished Montego Bay United and Portmore United, who were due to play Harbour View on Monday Night.

"It was wonderful performance. I just came up big after my error and coming up big for my team in the dying moments with a penalty save. It is awesome," said Hyatt perhaps feeling much taller than his just-over-6'0" frame.

Hyatt's comments were also an acknowledgement of how differently things could have gone. After sailing comfortably into the first half through goals from the impressive Vishunul Harris in the 17th minute and Dicoy Williams in the 24th and ending the half comfortably in the lead, Hyatt conceded a long-range drive from Ronaldo Rodney in the 46th minute in a move that started straight from kick off.

The former Glengoffe High School star sank straight to the ground, but was quick to pick himself up. And pick himself up he did, as he pulled of off a series of fine saves to keep his team ahead.

He saved his best for last as with the minutes ticking away, the outstanding Jabeur Johnson made a rare error in taking away the leg of the hard-running Owayne Gordon inside the 18-yard box, resulting in the penalty. That is when Hyatt gave of his best.

Marksman Dino Williams and the competition's leading scorer stepped up and powered his effort on goal as the small band of travelling Montego Bay United supporters looked on expectantly. The cries of jubilation which went up, however, were from the home fans.

leading up to the penalty

"I was really feeling disappointed after letting in a soft one and when we gave away the penalty I did not panic or anything. I just took a deep breath and just took one step to my left to throw him off because he saw me looking to my left so I just gave him the right side of the goal and dived to my right," was how Hyatt described the moment leading up to the penalty and immediately after.

"After that, it was an excellent feeling making that save as I helped my team to get a win and move to the top of the table. This can only get better right now. As long as we win the last three games in this round, we will be at least be joint leaders so that is a great feeling," he continued.

The performance, Hyatt said, reignited in him a desire to again be among the Reggae Boyz.

Getting there would be something for the man who represented Glengoffe High.

"I played for Glengoffe High, the school without a field. I have to big them up because we had no field and for a talent like me to come out of there is really special and I want to do even more," said the man who had a season of Under-20 football for Constant Spring, and two seasons of senior football with August Town before making his way to Arnett Gardens where he has been for the last nine years.