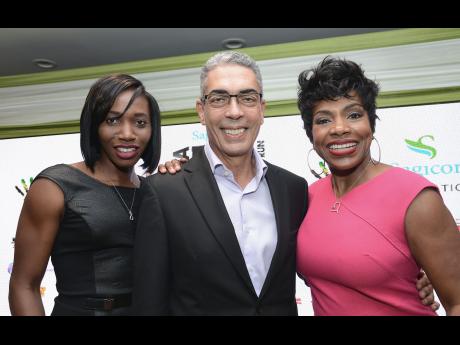 The Sagicor Sigma Corporate Run, set for Sunday, February 21, is ready to raise $50 million to contribute to three worthy causes.

Sagicor Group raised a record $26 million in 2015 and the aim for the 18th staging this year is to double the target of $25 million set last year.

This year's beneficiaries are Children with Cancer across the island, as well as the Jamaica Cancer Society and the Black River Hospital Paediatric Unit in St Elizabeth.

President and CEO of the Sagicor Group, Richard Byles, challenged Jamaicans to donate and pledge funds towards Sigma Run 2016.

"Over the years, we have raised $166 million mainly for children and institutions," Byles disclosed at the media launch yesterday at The Jamaica Pegasus hotel in New Kingston.

"Last year, we raised the most money in one year of $26 million. This year, we hope to raise $50 million. We have some special contribution cards in order to reach the target," Byles added.

"This year, we are focusing on cancer. We could not want a more worthy cause," he disclosed.

"We plan to give most of the funds to the Jamaica Cancer Society. We also want to help the children with cancer and the Black River Hospital," Byles said.

This year's patrons for the event are track and field stars Asafa Powell and Novlene Williams-Mills and actress Sheryl Lee Ralph.

Cancer survivor Williams-Mills, a relay gold medallist at last year's IAAF World Championships in Beijing, said she could not turn down the opportunity offered by Sagicor.

"It's an honour and pleasure to be a part of this year's Sigma Run. I'm a proud breast cancer survivor going back to 2012 when cancer became a part of my life," an emotional Williams-Mills stated.

"I know what it is for a family with a breast cancer survivor. It is a burden. I have to look in the mirror and see the many scars on my body. It is hard to deal with this thing called cancer, it will rip you apart," she said.

"Cancer has been a part of my family, as my sister died from ovarian cancer and my mother is also a cancer survivor. I ask for support for other survivors as they need help," Williams-Mills added.

Sheryl Lee Ralph revealed that cancer took away her father.

"In 2013, prostate cancer took my dad, he fought every minute of the disease. I'm very happy to be partnering with Sagicor to help educate others about the disease. Health really matters," the actress said.