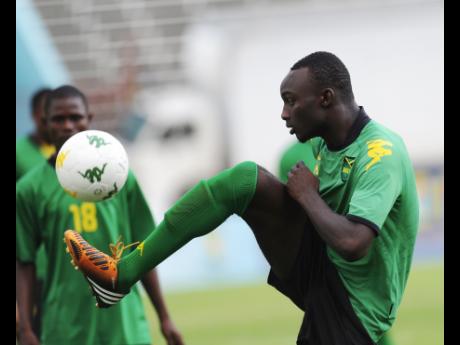 Jorginho James was on a mission on Monday night - a mission to prove that he was good enough, and he did just that in the Red Stripe Premier League as he led Harbour View to a thumping 5-0 over UWI.

Smarting from his 'rejection' by the US Major League Soccer (MLS), the ambitious 21-year-old box-to-box midfielder felt that there was only one way to handle the issue - perform.

"I have been working very hard on the training ground. I have been away and things did not work out the way I wanted them to, but I came back here to prove something, to show that they made a mistake when they did not choose me in that (MLS) combine, so for me personally, it is good and I have a lot more to work on in my game to get overseas," said the former Papine, Wolmer's and Kingston College student.

James, who showed his qualities with a goal-scoring debut for the Reggae Boyz as a 17 year-old, was Harbour View's best player on the night, as he scored the first goal for Harbour View in the fourth minute, had a hand in the second and scored the fifth, as they spanked the promoted UWI outfit.

John-Ross Campbell (51st), Brian Brown (71st) and substitute Rojay Smith (78th) scored the other goals for the team, which improved its tally to 33 points and narrowed the gap on fourth-placed Humble Lion to two points.

"I was not disappointed in my performance in the MLS combine because I went over there and did well. I think it was some administrative matters that caused it not to work and not about the performance that I gave on the field.

"I did well. My agent has talked to me and told me that I have nothing to worry about. He said I will be back there and will be in even better situations, so I have come back and refocus on getting the balls in the back of the net. This is important for myself and the club," James said.

James admitted that not having the contract he thought he would have had at this time especially after an opportunity to play professionally in Japan also fell through can be frustrating.

Having had just one national cap after making his debut for a total of two, James said it is not enough for him and the desire to get back into the fold burns in his belly.

BACK ON NAT'L SIDE

"It most definitely is my plan to get back into the national team. That is what I am working on. It is hard for us to get called up from the local league, so I am putting in the work to get overseas and it will be much easier for me. It is there in the making to come. It will come," he declared.

But the only way to get abroad is to do the work at, 'yard' and part of that is personal performance and winning with the team.

"I am most elated about the win this evening. We have been training hard, and the players are dedicated. I feel very good to know that the team scored five goals tonight. The way we did it also was very good. It was not just a one player, but a number of different players. It is very good for the club, the fans and the coaching staff.

"We are gunning for the championship. That is why we are playing not just to compete, but to win the competition not only this season, but every season," the very focused player said.