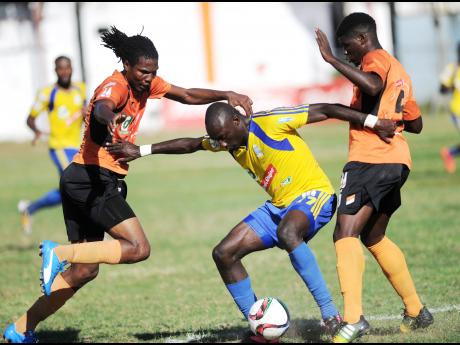 second minute, and defender Barrington Pryce got the winning goal in the 81st minute. Jorginho James netted for the losers in the 27th minute.

Tivoli started with more purpose as they ran at the visitors. The home side went ahead early when the 18-year-old Dawkins scored his first goal for the club.

However, Harbour View picked up the pace and equalised courtesy of James in the first half.

On the resumption, Tivoli continued their spirited play, but were let down by wasteful shooting from former Reggae Boy Jermaine 'Teddy' Johnson, who missed three sitters.

Not to be denied, however, they went ahead for good when Pryce climbed high and headed a right-side free kick taken by Junior Flemmings past goalkeeper Mark Bryan.

Tivoli's assistant coach, Damion Gordon, was pleased with the overall performance of his team.

"I'm very excited about the win today. It is our second since 'Admiral' returned. We dominated the game and should have won by a bigger margin," Gordon told The Gleaner.

Gordon, a former Tivoli defender and captain, spoke highly about Bailey's influence on the team since he (Bailey) returned last month and took over as technical director.

"He (Bailey) knows the club, as he spent many years here and won two Premier League titles, so it was a good move," the assistant coach said.

Flemmings, who is Tivoli's leading scorer on eight goals and who failed to get on the scoresheet despite working hard, also praised Bailey for his leadership.

"Well, first and foremost, it was a crucial win for us. The coach (Bailey) made the difference. He has been working on some things in training, and we followed his instruction and won the game," Flemmings said.

On the other hand, Harbour View's coach, Ludlow Bernard, was disappointed that his team came out losers.

"It was a disappointing loss as we wanted to move into the top four. The windy conditions made it difficult for us. However, it was a spirited performance from Tivoli. We will have to move on from this defeat," Bernard reasoned.

Tivoli moved to 26 points, but remained in 10th position, just above the drop zone, while Harbour View stayed in fifth position on 33 points.