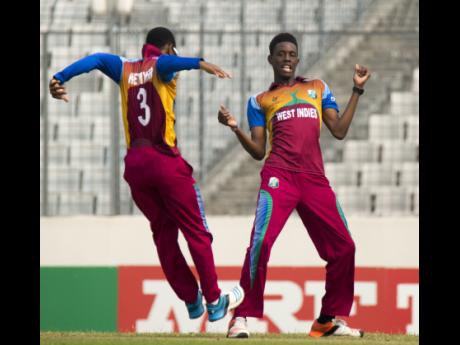 Photo courtesy of ICC
Shamar Springer (right) celebrating with his captain Shimron Hetmyer during the ICC Under-19 World Cup semi-final between West Indies Under-19 and Bangladesh Under-19 yesterday.

Indies cricketer, Shamar Springer, who broke Bangladeshi hearts with an unbeaten half-century that set up a thrilling, three-wicket victory, says it felt good to beat the hosts in front of thousands of spectators.

Springer steadied the young West Indies innings with an unbeaten 62 from 88 balls, which steered them past Bangladesh's 226 all out, with eight balls to spare in front of thousands of dejected home fans.

His match-winning effort, which followed a disciplined bowling performance in which he grabbed two wickets, ensured the Caribbean side will meet the undefeated India Under-19s for the title on Sunday at the same venue.

"This is a very heart-warming feeling to guide my team to victory. It feels very good and it feels even better to beat them in front of 15,000."

Springer capped his performance by hitting the winning runs, a drive through cover, off Mohammad Saiffudin, for his fifth four, and was named Player of the Match.

"I was very satisfied," said Springer, referring to his bowling figures of two for 36 from ten overs, same as compatriot Chemar Holder.

"This was my best performance, in my opinion, with the ball, and it was great to get that performance in at this stage".

will play in the Final of the tournament, following Denesh Ramdin's side which lost to Pakistan Under-19s 12 years ago.

"They should watch us because we are young and

exciting and just hungry for victory," said Springer, in a comment directed at West Indies fans eager for a favourable outcome in Sunday's final.

"They should also look forward to see my chestroll again".