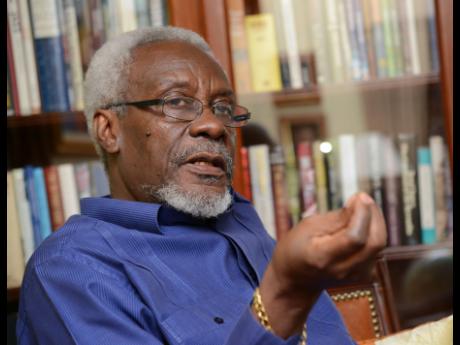 One of the region's foremost cricket students, P.J. Patterson, said the success of the Under-19 team at the recent World Cup offers hope for a revival in West Indies cricket.

"It is the sign that there could be a new beginning. What has to happen is that the talents have to be harnessed. They ought to be properly handled and promoted," Patterson told The Gleaner.

Three Jamaicans, Michael Frew, Shahid Crooks and Odean Smith, were a part of the squad that defeated India by five wickets in Bangladesh two Sundays ago to win the title.

The former Jamaican prime minister, who led a team which proposed far-reaching changes to the structure of cricket in the region, said it is important the Under-19s are properly managed.

"They are under 19, so you can't be exposing them to the hazards of constant competition without ensuring that the body structure is properly developed," Patterson said.

"I wish that they will be taken in hand as we could see a restoration in the near future of West Indies cricket fortunes," he added.

"School cricket is this foundation or base and needs to be greatly strengthened," he recommended.

Meanwhile, the success of the Under-19s comes as the senior men's team prepares to travel to India to defend their T20 world title.

"It is going to be very competitive. We have selected the team that is going to represent us and I think it is the best that is available in the circumstances," Patterson said.

However, Patterson said it won't be a walk in the park for the West Indies.

"If you have been watching international cricket, all the other sides are going to turn up and we can't afford to do anything but play constantly at our best. All members of the team are going to have to contribute - batting, bowling, and fielding," he said.