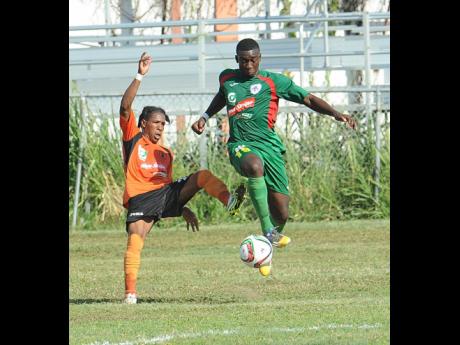 Another nail was just seconds away to being driven in Waterhouse's Red Stripe Premier League coffin when substitute Rodave Murray, showing great predatory skills, buried an opportunity to draw his team level and possibly delay their inevitable relegation.

Murray's 90th-minute strike was his first in the country's top-flight football, and it came in only his second game, following a strike by Kenroy Howell in the 23rd, as he gave his team hopes of pulling off a rare victory.

Two second-half goals from substitute Chevonne Marsh in the 57th and Dawyne Smith in the 87th set up Cavalier perfectly for the win, until Murray's late intervention.

For Murray, the occasion was bittersweet.

"This is my first goal, but it is my second match in the Premier League. My first match was against UWI FC. I am feeling great, but at the same time, I am feeling disappointed. The coach said to us that the aim is to get three points, but we should not leave pointless, and we left with a point, so that is good," the 18-year-old Dinthill daCosta Cup star said.

He added: "I am disappointed because we came out here today looking a victory, and we did not get it."

Though their chances of survival are being written off with each passing match, Murray is still hopeful.

"There is still time and opportunity for us, we just have to keep fighting and working hard, and the rest of the competition will tell," said the youngster, who scored 27 goals for Dinthill last season.

Besides trying to help his team survive the drop, Murray, who hails from Orange Field in Linstead, St Catherine, wants to retain his place in the country's Under-20 squad and earn himself a professional contract.

"My dream is to take it to the pro level, so I am just working hard towards that, and good performances in this league will help.

"I have been invited to Jamaica's Under-20 squad, and my aim is to join the team, work hard, and ensure that we qualify for the World Cup," the youngster explained.

At 18, Murray still has another year of eligibility at the schoolboy level, but he could pass on it if the opportunity presents itself.

"I have another year at the schoolboy level, but I am not sure if I will return as yet. If I get a professional contract, I will take it. I have had offers from Europe; that is where my agent is based, so we will continue to look until something suitable comes," Murray said.

Murray added that he came close to joining Montego Bay United in the January transfer window.