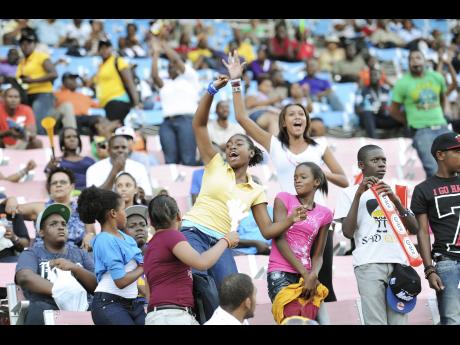 File
Track and field fans celebrating in the grandstand during 2012 ISSA-GraceKennedy Boys and Girls' Championships at the National Stadium.

The Inter-secondary Schools Sports Association (ISSA), governing body of high school sports, is reporting increased demand for National Stadium grandstand tickets from fans of the ISSA-GraceKennedy Boys and Girls' Championships. Colleen Montague, chairperson of the ISSA committee that organises the five-day high school athletics meet, says that orders for grandstand tickets are up by as much as 300 per cent. Montague is also reporting that gate management will improve at this year's renewal of the meet known widely as 'Champs'.

In response to a query on ticket sales for the upcoming event, Montague said, "Orders are up by about 300 per cent." Much of the increase is apparently coming from persons who successfully ordered tickets in previous years. "They ordered one last year and they're ordering 5-10 this year, which we'll be unable to meet that demand," she related, "so those requests will not be filled because we will simply be going by the numbers we had last year."

The cap on grandstand ticket sales is caused by the number of available seats. Said Montague: "Limited space is our greatest problem, and expansion is impossible at this point."

Opened in 1962 to host the Central American and Caribbean Games, the National Stadium has a grandstand that seats 5,000 patrons.

"On the Saturday afternoon (last year), we unfortunately had a breakdown because we had ticket holders and non-ticket holders in the same place, so that is something we will avoid this year," she said.

The big event is set for the National Stadium from March 15 to 19.