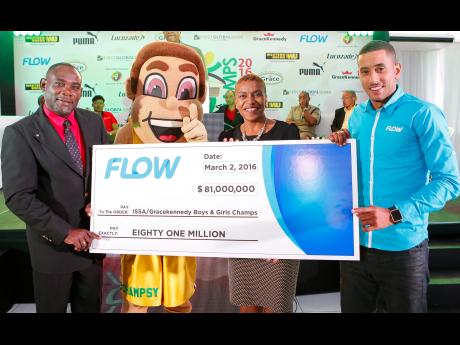 The ISSA/GraceKennedy Boys and Girls’ Athletic Championships (Champs) was launched today at the Spanish Court hotel in Kingston.

Champs will run from March 15-19 at the National Stadium.

Puma will use the event to launch its newest Puma evoSPEED disk track and field spikes inside the National Stadium.

Small implored all partners associated with the showpiece to maintain its excellence as well as improve on it.

Title Sponsors Grace presented $54 million today, as part of an overall $100 million sponsorship towards this year's staging of the event.

Live coverage of the showpiece will be provided free to air on Television Jamaica, TVJ SN via cable television and live streaming via the worldwide web on onespotmedia.com.

Tickets will go on sale as of March 15.

On Tuesday’s opening day, there is no entry fee, while Wednesday and Thursday will see children paying $100 and adults $500 for bleachers and grandstand entry.

On the final day, Saturday, students will be required to pay $1,500 for bleachers and adults $4,500 for grandstand.