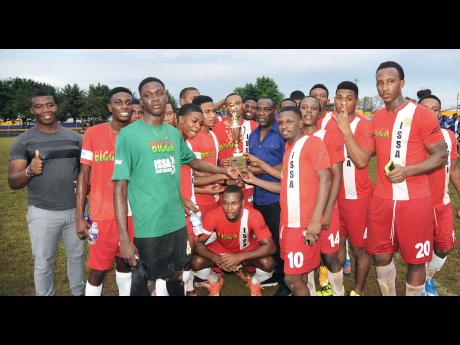 Paul Clarke
Inter-Secondary Schools Sports Association president, Dr Walton Small (centre), presents the winning trophy to the All-Manning team after their 1-0 victory over an All-daCosta XI in their match at the St Elizabeth Technical yesterday.

Hydel High's Stephen Barnett scored in the second minute for the All-Manning team, who again won their clash with a select All-daCosta Cup team yesterday at the St Elizabeth Technical Sports Complex to maintain their hold on the trophy they also won last year.

Winning coach Miguel Coley told The Sunday Gleaner he was happy to be on the winning side again, but was full of praise for the All-daCosta Cup team comprising the likes of Deshane Beckford (Rusea's), Travar McCulloch, Chris Andrew Dixon and Neville Morgan (STETHS), and Rodave Murray of Dinthill Technical.

"It was a great game. We won, but I was also impressed with a number of players from the All-daCosta Cup side," said Coley.

"It shows that Jamaica's football is in good hands, but the onus must now be on moulding the individual talent and making sure that we get the best out of each player to strengthen the nation's football," he added.

Barnett's strike came against the run of play, as the All-daCosta team started with more intent and were unlucky not to have score at least one of their chances.

The All-daCosta team were kept out by the brilliance of the All-Manning goalkeeper Akeem Chambers. The Wolmer's Boys goalkeeper was absolutely fantastic and was the difference in the final scoreline.

The quality of the players was not lost on the University of Rhode Island football coach Gareth Elliott, who was among the scouts who watched the match.

"It's wonderful witnessing the quality players here in Jamaica. We could use some of their speed and skill in certain areas of our programme," he said.

"We have been looking at several players who could possibly fit into our programme but that all depends on their academic level," stated Elliot.

The ISSA Scholastic XI edged the Jamaica Under-17 team 1-0 in the day's early game.