The cost of Champs 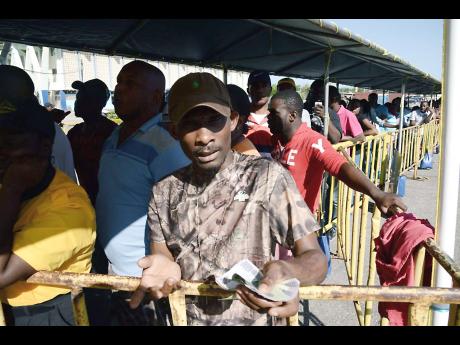 Rudolph Brown
Patrons stand in line for tickets to view the ISSA/GraceKennedy Boys and Girls' Athletic Championships, which begin at the National Stadium tomorrow.

As the island awaits the start of another Inter-Secondary School Sports Association (ISSA)-GraceKennedy Boys and Girls' Athletic Championships, the question being posed is: what is the real cost of Champs?

In January, the old boys' associations of three of the biggest schools which participate in the annual event Calabar High, Jamaica College (JC), and Kingston College (KC) told The Gleaner that collectively they spend an average of $45 million each year preparing their respective athletes for the five-day championships.

Manager of the JC team Ian Forbes, when asked how much his school spent on preparing a team for Championships responded: "To prepare a team properly, you would be talking in the range of $4 to 6 million."

When pressed further, he added that that amount would have been spent in only the final three to four months before the actual event.

He added that the figure could go much higher.

The all boys' school has a team of 65 participating in Champs this week, down from a pool of more than 90.

"If you look back to last July, last August, it's not inconceivable. It could be in that neighbourhood ($15 million) actually. I was looking at the last three to four months," Forbes said.

"There are a number of things to be factored - nutrition, you have to pay coaches, there is medical, the feeding programme, transportation extra lessons for the boys because the boys spend such a lot of time practicing so you have to make it up somehow," he added.

Riley also noted that many of the facilities which other schools would have to pay for are already housed on Excelsior's Mountain View Avenue campus, such as kitchen and boarding, which significantly reduces costs.

"All costs of accommodations that other teams would incur, we have here, so we save ourselves that. And this year we are not buying new gear like, we did last year," he added.

Riley, a former head coach of Wolmer's Boys' School, said that while he was at the Heroes Circle-based school, the hotel bill for accommodation for Champs week alone was $600,000.

This year, Champs' title sponsors, GraceKennedy, invested $81 million into the event, a figure which represents less than one third of the amount JC spends in the course of a year to prepare its team.

More than 200 boys' and girls' teams combined participate in championships. ISSA President Dr Walton Small said while some of the profits made from the Championships back to the schools, it is nowhere near the amount being spent.

"Champs is not just about Champs. Champs is about ISSA," he said, adding that the money ISSA makes from Champs helps to run the body's other programmes.

"To run the football programme is taking us well over $30 million or more than that, and that is just for the senior team. The Under-16 and Under-14, just the uniforms alone cost $19 million. The principals understand and the principals know that this is the main event we use to garner funds to run other sports.

"Yes, we could give back more to the schools back more, but at what cost? Is it that we are going to ignore badminton, lawn tennis, table tennis, basketball, hockey, swimming?

"We can't do that. Plus we have a staff to pay and, therefore, a lot of the money from Champs goes back to those," Small said.

Meanwhile, Forbes said while the financial return to the school may not be immediately visible, there are other benefits which come from the investment.

"There is the opportunity to provide for the athletes to get scholarships and professional contracts. It helps their whole programme from a marketing perspective. Everybody loves a winner, and when you win, good things flow. The stakeholders are happier, and when they are happier, they contribute more, so it's a ripple effect," he said.