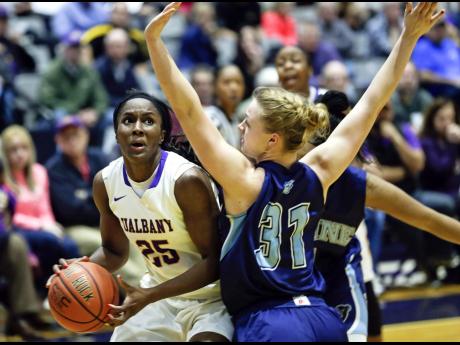 DeMar DeRozan matched his season high with 38 points and added 10 rebounds as the Toronto Raptors beat the Miami Heat 112-104 in overtime on Saturday night.

Jonas Valanciunas added 20 points and 10 rebounds, while Kyle Lowry chipped in with 16 points for the Raptors, who secured the season series against the Heat for the second straight season, as well as a potential play-off tiebreaker should they finish with the same record.

Joe Johnson had 28 points while Luol Deng added 20 for the Heat, which had Dwyane Wade on the sidelines with an injured thigh.

Deng tied it at 97 on a three-pointer from the corner with 3.1 seconds remaining in regulation and DeRozan's jumper before the buzzer went in and out.

In overtime, the teams traded scores until five straight trips to the free throw line, four for DeRozan and one for Bismack Biyombo, allowed the Raptors to score seven unanswered points to take a 109-101 lead with 42 seconds to play.

Johnson's three-pointer closed the gap to six points, but a pair of free throws from Cory Joseph allowed Toronto to close out the game.

Stephen Curry scored 15 of his 35 points in the fourth quarter and the Golden State Warriors rallied from a nine-point deficit over the final 12 minutes to beat the Phoenix Suns 123-116.

Curry, who spent most of the third quarter on the bench in foul trouble, made three of his seven three-pointers in the fourth, including two as part of an 18-8 run to close out the game.

The NBA's reigning MVP capped his night with a behind-the-back pass to Shaun Livingston for a layup that helped extend the Warriors' record home winning streak to 48 games.

Only Golden State with their current 48 and the Chicago teams that won 44 straight in 1995-96 had longer streaks.

LaMarcus Aldridge added 24 points and Tim Duncan had 11 for San Antonio. Kevin Durant had 28 points for the Thunder.

Jusuf Nurkic scored all of his season-high 17 points in the second half and the Denver Nuggets rallied in the fourth quarter to beat the Washington Wizards 116-100.

Gary Harris, D.J. Augustin and Darrell Arthur also scored 17 points and Will Barton finished with 14 points and 10 rebounds for Denver. The Nuggets outscored Washington 41-17 in the final 12 minutes to win their fourth straight.

John Wall had 19 points and 11 assists and Otto Porter scored 21 points for the Wizards.

Elsewhere, the Milwaukee Bucks topped the New Orleans Pelicans 103-92, the Atlanta Hawks downed the Memphis Grizzlies 95-83, the Detroit Pistons used a big second half to beat the Philadelphia 76ers 125-111, and the Charlotte Hornets had a 125-109 win over the Houston Rockets.