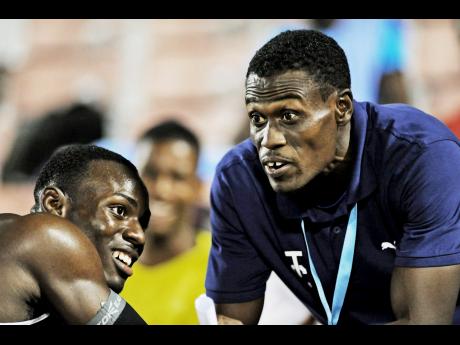 File
Jamaica College's O'Brien Wasome (left) talks with his coach, Ruel James, at the ISSA Boys and Girls' Champs at the National Stadium.

When the 2016 Inter-Secondary Schools Sports Association (ISSA)/GraceKennedy Boys and Girls' Athletics Championships get under way tomorrow at 1 p.m. with the preliminary round of the boys' Class One long jump, O'Brien Wasome of Jamaica College (JC) will have two targets.

As captain of his school team, Wasome will be expecting to advance to the final and to repeat his 2015 victory. He will also be chasing a big goal: a place on the Jamaican team to the Olympic Games in Rio de Janeiro.

To reach that goal, he needs to long-jump 8.15 metres, or further, before the period for seeking qualifying marks ends on July 11. If that were to happen at Championships, it would take him well past the Class One record of 7.87 metres set by Leon Gordon of Vere Technical High in 1993. It's a task that isn't daunting for the outgoing JC senior.

"I'm looking forward to making the Olympic team," he said with quiet assurance before a recent training session.

He would also need to earn selection through his performance at the National Senior Championships.

"My training is going good, so I'm putting in all the work," said the Ruel James-coached athlete. Signs of the quality of his preparation came at the recent Carifta Trials, where he won the under-20 long jump with a distance of 7.59 metres. That is his best of the season so far.

Wasome won both the Class One long jump and triple jump last year and is aiming to repeat.

The triple jump record belongs to his teammate, Clayton Brown, at 16.04 metres. Wasome won with a wind-aided jump of 16.24m but had a legal effort of exactly 16 metres.

His 2015-winning long jump of 7.71 metres places him in joint second place on the all-time Champs performance list, with Neil Gardner of Wolmer's Boys' and Maurice Wignall of Calabar. They were second and third with jumps of 7.71 and 7.68 metres, respectively, when Gordon set the record in 1993. Wignall produced a 7.71m of his own at Boys' Championships in 1994.

One of Wasome's prime rivals may miss the five-day Championship. Alrick Ottey of Cornwall College did the Class One long/triple jump double at Western Championships and produced a big jump of 7.46 metres on grass at the STETHS Invitational. However, he was injured at the Carifta Trials in the triple jump.