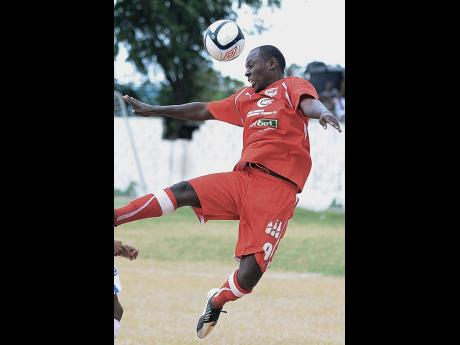 Pint-sized striker Peter Keyes thought he had unlocked a victory for Boys' Town over defending champions Arnett Gardens in the Trench Town derby on Monday night, when he fired his team ahead in the 46th minute.

His hopes were dashed in the 54th minute when defender Dicoy Williams headed home a Marcelino Blackburn cross to tie the scores.

"Scoring was a good feeling and the way we played is work in progress. Since the last month, we have put in some hard training and it is paying off. The last two games I have scored back-to-back goals, so it is a good sign," said Keyes, who was disappointed not to win the game.

"The goal against us was a mishap between the defenders and the goalkeeper. We had a slip-up and paid the price, but it is always good to get a point away from home.

"We came into the game with positive thoughts; hoping to win or even come home with a draw, but we can't curse ourselves. We really played well in stages and came home with a point, and that is good enough," the former Vauxhall High Manning Cup player said.

While most people would have written off Boys' Town's chances of advancing to the semi-final, the player who is in his second stint at Boys' Town after stops at Waterhouse and Cavalier believes they have a realistic chance.

"The aim is to stay in the League and remain competitive. The semi-finals are still not out of our reach. The fourth-placed team is on 39 points and we are on 35 points and with four games to go, that is 12 points, so if we continue to work hard and get some three points here and there, it is not impossible," said Keyes.

Despite being on the wrong side of his career, Keyes, like most players in the League, still harbours thoughts of a much-coveted national cap.

"I am 29 and once you are playing and performing and you have condition, it is never out of your mind. You always have a national call in the back of your mind. I have been working hard over the years and if one should come right now, I would grasp it with both hands," said the man who has so far scored six goals this season.