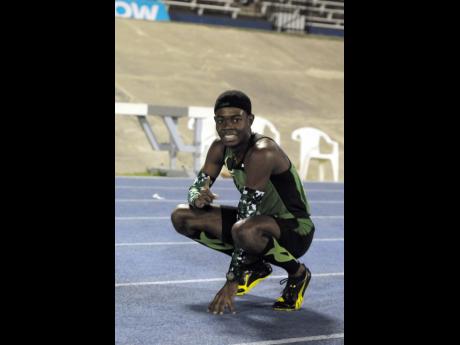 Kingston College (KC) continue to go about their business in a workmanlike manner; Calabar High had another so-so day; Christopher Taylor is at it again; and the Edwin Allen machine is cranking into high gear.

The ISSA-GraceKennedy Boys and Girls' Athletic Championships had its fair share of high points yesterday, and with today's penultimate day of competition promising major excitement with the 100m finals and key hurdles and field events battles, it's the KC faithful who are happiest at this stage.

The boys from North Street lead the way with 37 points, with Jamaica College (JC) keeping them company with 33.5. Petersfield High's team has impressed all week and they are currently third on 28 points, with St Jago as next best on 24, and defending champions Calabar in fifth with 23.5 points.

Edwin Allen have been hitting the right keys so far, hardly putting a foot wrong since the opening day of competition. They are on course to defend their Girls' title with 47 points after six events, 14 ahead of Hydel, with Excelsior in third place on 26 points. Holmwood (24) and St Jago (23) round out the top five.

Calabar will have to work deep into Saturday night if they are to retain their title, but they certainly have the tools to do so.

"I am not perturbed. We still have enough depth to go on and win," said Calabar's head coach Michael Clarke.

Taylor, who already helped himself to the 400m record on Tuesday, was clearly not satisfied as he powered through the line in his Class Two Boys' 200m semi-final, stopping the clock at 20.80, which betters another Calabar man - Ramone McKenzie's 20.89 run in 2007.

His schoolmate, Dejour Russell, followed up that run with an impressive one of his own, clocking 21.08 to win his semi-final, knowing very well that the defending champions will be banking heavily on maximising points in this event in tomorrow's final.

Petersfield's Sanjae Lawrence took gold in the Class One Boys' discus event with a 53.90m heave to get the better of Excelsior's Phillip Barnett, 53.78m, and Calabar's Warren Barrett, who would have been disappointed with his 52.88m bronze-medal mark.

Michael Campbell (JC), who clocked 10.83, and Jhevaughn Matherson (KC), 10.95, both dipped below 11 seconds despite a strong headwind in the Class One Boys' 100m, with other podium contenders Raheem Chambers (St Jago), 11.02, and Nigel Ellis (St Elizabeth), 11.04, also looking comfortable in qualifying to today's semi-finals.

With Tyreke Wilson missing due to injury, his Calabar teammate Dejour Russell seems to have little to be worried about where the Class Two Boys 100m gold medal is concerned.

Russell followed Wilson to the line in a Calabar one-two at last year's championships, but he is expected to boss the event this time around. He was certainly commanding in winning his heat yesterday afternoon, stopping the clock at 11.49 with little effort.

He was still making his way back to the Stadium East area when Munro College's AndrÈ Edwards posted 10.95 to win his heat and perhaps give the Calabar man something to think about, with JC's Chislon Gordon, 11.06, and Gary Gordon (St Jago), 11.28, also advancing impressively.

Top-billed Jamaica College (JC) pair of defending Class One triple jump champion, O'Brien Wasome, who already won gold in the Class One Boys' long jump on Wednesday, and record holder Clayton Brown will take their rivalry into today's final after both booked safe passage from yesterday's preliminary round.

St Jago's Keenan Lawrence is the form athlete in the Class Two Boys' 1500m, with many expecting him to seriously test Kemoy Campbell's record of 3:58.06 set in 2007

He was comfortable in qualifying for the final, winning his heat in 4:12.98 ahead of Calabar's Kimar Farquharson, who posted 4:13.40 for second place.

St Elizabeth Technical's Dwight Mason was, however, the fastest among the qualifiers, stopping the clock at 4:12.89.

The Class One equivalent saw Rusea's athlete Akeem Colley, who won his heat in a season's best 4:05.40, registering the quickest time going into the final, with gold-medal favourite and defending champion Shevan Parkes finishing second in a time of 4:06.01.

Samara Spencer of Hydel High leads all qualifiers into tomorrow's final of the Class One long jump - set for 4:53 p.m. - after registering a huge season best of 6.04 metres during yesterday's prelims.

Excelsior will seek to continue their fine showing at this year's championships in the Class Four high jump final as their duo of Shantae Foreman and Daniel Harris both cleared 1.55m, with gold-medal favourite Foreman doing so on her first attempt.