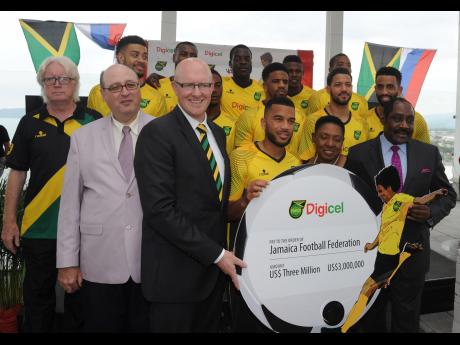 THE Jamaica Football Federation (JFF) received a well-needed boost yesterday when Digicel CEO David Butler announced that the telecoms giant would be extending its sponsorship of the country's football for the next four years to the tune of US$3 million (J$366 million) at Digicel's head office in downtown Kingston.

According to Butler, the contribution is not only for the national senior team, currently involved in World Cup-qualifying football and will face Costa Rica on Friday and Monday, but it is geared towards the entire programme including women and youth development.

The communications firm has included other initiatives, including financial bonus for every game won or drawn, and a donation to a charity of the scorer's choice for every goal converted by the Boyz.

Butler further pointed out that since Digicel became a part of, the Jamaican landscape in 2001 contributed over a billion dollars in support of the JFF.

"This new partnership of $366 million will be for the next four years, and we hope this will give the programme a boost and put the team in position as they look to Russia and beyond. Digicel hopes to be a part of the euphoria when Jamaica qualifies for Russia 2018," he said.

"This will support other initiatives such as women's football, youth football and the senior team to ensure that the Boyz stay on peak in their preparation."

JFF president Captain Horace Burrell noted that the federation has been going through very difficult times financially and that the sponsorship came at the perfect time.

"Our partnership with Digicel could not have come at a better time. The JFF has been struggling. Even some overseas-based players question why is it so hard for a brand like the Reggae Boyz to get a sponsor. But Digicel is the real deal because while some sponsors support programmes with kind, Digicel supports it with money," said Burrell.

"We need more support from corporate Jamaica and the Government because sports put us (country) on the world map and without sports the recognition we have received internationally would not be possible," he stated.

Meanwhile, Minister of Sports Olivia 'Babsy' Grange, says Digicel has made itself a part of the Jamaican family and she commended it for its input to the continued development of sports.

"This new administration is very happy to continue the development of sports as a critical vehicle for economic growth," Grange said. "Football has and continues to be a unifying force in this country. Digicel is a striving enterprise and the company's contribution is invaluable.

"But it goes without saying that there can be no successful programme or team without sustainable capital injection, and this is just one of the many contributions that has made Digicel such a highly respectable company," she stated.