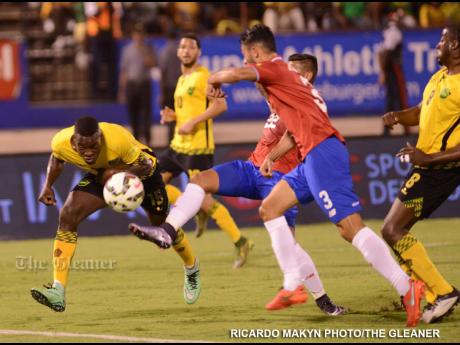 A header from Jamaica's Je-Vaughn Watson (15) secured the opening goal.

Jamaica’s Reggae Boyz broke their losing sequence at home with a 1-1 draw against Group Two leaders Costa Rica in their CONCACAF World Cup Qualifying football match at the National Stadium.

Playing without injured captain Rodolph Austin, head coach Winfried Schafer started with practically the same team that took three points in a 1-0 win in their previous fixture in Haiti and kept Je-Vaughn Watson at attacking instead of defensive midfield.

The move paid off. The Jamaicans had lost previous matches 0-2 to Panama and 2-3 against Nicaragua, but Watson scored at the 16th minute to give the hosts a share of the points at ‘The Office’ in a very competitive and hard fought game.

Full-back Johnny Acosta equalised for the Central American team at the 67th minute of a match where both teams scored during their passage of dominance, when they had the lion’s share of possession and pressed the opponent inside their defensive third.

After a period of prolonged pressure when they were attacking mainly down the right flank through Joel McAnuff and the overlapping Alvas Powell, Jamaica took the lead in the first-half. Interestingly, the goal-making play emanated from the left with a curling cross from Kemar Lawrence to the far post, where an arriving Watson dived and headed the ball across Keylor Navas to the side of goal from which the ball came.

During the second half, poor defensive play in deep midfield, with an attempt to steal a pass off Bryan Ruiz instead of holding ground goal-side, was exploited with a skillful turn from the attacking midfielder, who opened up yards of space enroute to goal.

His pass was deflected by Joel Campbell to unmarked substitute, Christian Bolanos, who hit a grounded shot at goal.

Andre Blake dived and blocked the ball into the path of overlapping fullback Johnny Acosta, who firmly put away the rebound.

Besides the goals, Jamaica went closest to scoring again, with big centre forward, Clayton Donaldson, who pressured the defence and held up the ball well on many occasions, sliding an attempt just wide of the post at the end of the half. It wouldn’t have counted, as the assistant referee had waved offside.

Inside the second half they thought they had a 2-0 lead when Powell’s long throw took a deflection and eluded Navas. However, American referee Jair Marruffo appeared to make a call of kindness as he blew Donaldson for a foul on the goalie.

After three matches apiece, Costa Rica stayed ahead of the four-team group with seven points, three more than Jamaica and Panama, who drew goalless in Haiti. The latter were earning their first point.

The top two will advance to the six-nation Hexagonal, which ultimately decides the three-and-a-half qualifiers from the Confederation for the 2018 World Cup Finals to be held in Russia.