We played with our all - Schäfer 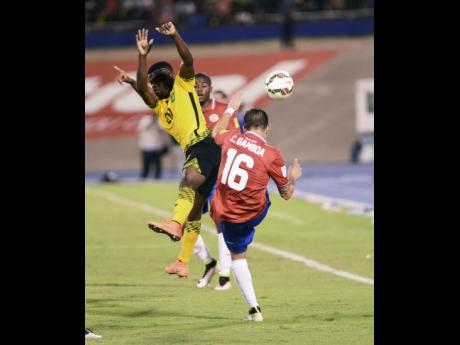 Despite putting on a fearless, entertaining and commanding first-half performance which should have seen his Jamaican team outscore Costa Rica en-route to a comfortable win, Reggae Boyz' head coach Winfried Schafer labels the 1-1 result in Friday night's CONCACAF Semi-final Round Group Two World Cup Qualifier a good one and believes his charges will win the return tie tomorrow.

Jamaica's Je-Vaughn Watson scored a bullet header in the 16th minute, while a number of close chances for the home team went beckoning inside the almost full to capacity National Stadium.

The Jamaicans also had the lion's share of possession in the first-half and were more direct, but just couldn't get the ball into the net more than once in Friday night's game.

"We played with our all, that's what we worked at in training and in the second-half the players got a little bit tired. The left side had a small problem, but we showed teamwork because we are one of the best teams in the CONCACAF and the end is OK, 1-1 is OK," said the coach.

Schafer admitted that his charges were short with that elusive second goal, but showed guts.

The coach also defended his substitutions, stating that Lee Williamson, who was very good in the first-half, was taken out because he was tired, adding that forward Darren Mattocks might have been introduced a little too late.

"Again, our team today played in this match was very good. We intend to beat Costa Rica at home," he reiterated.

"The plan is to recover the players, the players sleep good and we make our recovery. After that we go to Costa Rica," he added, noting that captain Austin should be OK to play in Costa Rica.