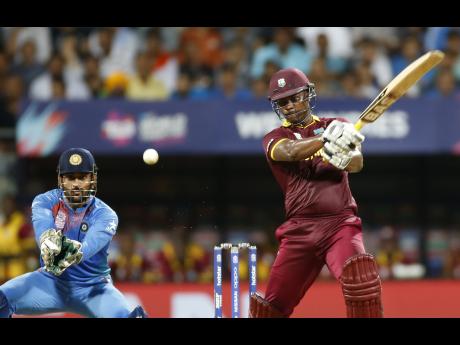 Simmons, who joined up with West Indies only after Andre Fletcher was injured in the last group match, was twice caught off no-balls but smacked seven fours and five sixes to guide his team to 196-3 in 19.4 overs.

India had relied on Virat Kohli's unbeaten 89 off 47 balls – his third unbeaten half century in the tournament – to score 192-2 but Simmons and Johnson Charles (52) took up the charge in a disciplined run-chase after Chris Gayle was dismissed in the second over.

West Indies, which won the 2012 tournament, will now take on England in the final at Kolkata on Sunday.

Simmons showed his experience of playing for Mumbai Indians in the IPL at Wankhede Stadium by sharing 97 runs with Charles and then a splendid 80 off just 39 balls with Andre Russell, who remained unbeaten on 43.

Kohli dismissed Charles off his first delivery to make it 116-2 in the 14th over but Russell continued to dominate the Indian bowling to the disappointment of 32,000 home fans, mostly wearing the Indian blue shirts.

"We knew it was going to be a massive step, against a very good India team, but we knew halfway they were 10 runs short," said West Indies captain Darren Sammy, who won his fifth successive toss in the tournament and opted to field.

"I was just praying we won the toss, I surprised myself winning five out of five (toss)."

"Everyone said Chris (Gayle) is under pressure but I said it, we have 15 match-winners and today Charles, Simmons and Russell took that responsibility."

Earlier, Rohit Sharma (43) and Ajinkya Rahane (40) provided India its best start in the tournament by putting on 62 runs off 44 balls but West Indies should have got rid of dangerman Kohli on one.

Kohli tried to steal a bye after he missed Dwayne Bravo's slower delivery but first wicketkeeper Denesh Ramdin's underarm throw missed the stumps and then Bravo collected the ball midway down the wicket but his throw went past the leg stump with Kohli way out of his crease.

The close miss didn't stop Kohli from taking charge with his trademark brisk running between the wickets by converting singles into twos.

Kohli added 66 runs off 49 balls with Rahane and then accelerated in the last five overs by adding 64 runs with captain Mahendra Singh Dhoni (15 not out).

"The only thing I am really disappointed with is the two no-balls," Dhoni said. "There was not much on offer, we wanted our fast bowlers to make a game out of it but the conditions were very tough."