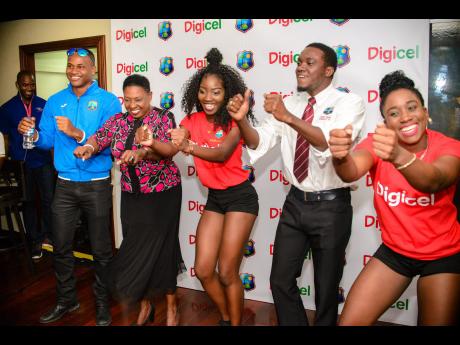 "Beating the English is much sweeter," stated Samuels, shortly after he and other Jamaican members of the West Indies team returned home on Tuesday night.

"The English like to talk, and, to me, they are just negative towards us," said Samuels, who was named Player of the Final for his unbeaten 85.

"If we play against Sri Lanka, the Sri Lankan press will never put us down, never disrespect us and stuff like that.

"But playing against England, it's different," he said.

Samuels utterances comes against the background of a recent apology issued by renowned English cricket journalist and commentator, Mark Nicholas, regarding the West Indies.

Writing in a pre-World Twenty20 prediction column for ESPNcricinfo, Nicholas, a former England first-class cricketer, said: "West Indies are short of brains, but have IPL history in their ranks".

However, in a follow-up column on Monday, Nicholas apologised, saying: "Unreserved apology to Darren Sammy (West Indies captain), a man I hold in the highest regard, to his team and to the coaches around them for the throwaway phrase I used."

English Cricket Board chairman, Colin Graves, is also on record as saying that the West Indies is a "mediocre" team.

He made the statement ahead of English Test tour of the Caribbean last summer.

All-rounder Andre Russell, who was originally slated to return home on Tuesday night as well, along with Chris Gayle - who it is understood stayed back in India ahead of this weekend's start of the Indian Premier League (IPL) - are the other Jamaicans who were part of the victorious contingent.

Russell, who, too, is scheduled to take part in the IPL, is to meet with the Jamaica Anti-Doping Commission for a hearing regarding allegations that over the past year he missed three out-of-competition whereabouts drug tests.

If found guilty, based on World Anti-Doping Association rules, Russell could face sanctions ranging from a public warning to a two-year suspension.

West Indies Cricket Board president Whycliffe 'Dave' Cameron who returned home on the same flight as the Jamaicans Tuesday, did not take part in the welcome reception.