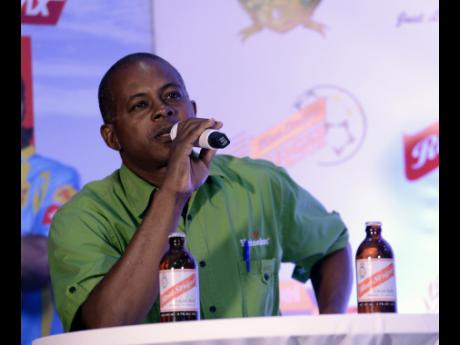 Promoted Portmore United have their sights set on finishing at least among the top two in the 2015-16 Red Stripe Premier League (RSPL).

A top-two finish will ensure that the club qualifies for the Caribbean Football Union (CFU) Club Championship next season. Manager Clive Marshall said yesterday that a return to the CFU championship could open doors to overseas contracts for the players.

Speaking at yesterday's weekly RSPL conference, which was held at the sponsors' head office on Spanish Town Road, Marshall said: "We want players to get contracts overseas in order for them to be able to better their lives and help their families."

He added: "When the team got demoted two seasons ago, it was our aim to return to the RSPL then qualify for the CFU, and we remain on course for that.

"I had also declared back then that the club would be back in top-flight football soon. And that was done," he emphasised.

Portmore finished the preliminary stage of the RSPL on 61 points and earned $1 million for that feat. They will face Humble Lion in the first leg of a two-way semi-final tie on Sunday at the Effortville Community Centre in May Pen, Clarendon, starting at 3:30 p.m.

The winners of the tie would be eligible to represent Jamaica in the CFU Club Championship next season.

"Well, for us it is about focusing on the semi-finals against Humble Lion. We are confident and will go there for a positive result," he said.

Portmore United and Tivoli Gardens have won the most national titles with five each. With Tivoli out of contention this season, Portmore have the chance to go ahead by winning a record sixth national title.

Montego Bay United and defending champions Arnett Gardens will meet in the other semi-final.