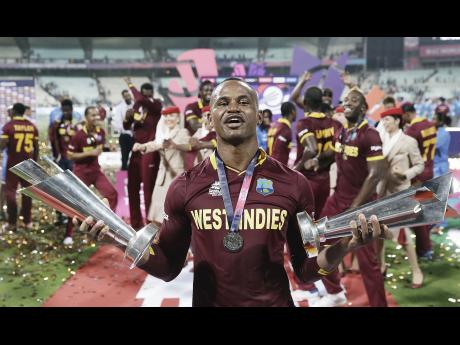 AP
West Indies’ Marlon Samuels celebrates with trophies after his team’s win over England in the final of the ICC World Twenty20 2016 cricket tournament.

The situation, he declared, is forcing him to retire from Tests.

"The way how things are right now, it is forcing me to give it (Test cricket) up," stated Samuels, who was Player of the Final in the just-concluded ICC WorldTwenty20 in India.

"I would like to continue and play as long as possible, however, until things improve, I doubt it," he offered, as this summer's home series against India in the Caribbean loom large.

He continued: "If you look at the system now, we have more young players playing when we should have more senior players and a couple of young players.

"It means, therefore, that it could be said that we are not going in the right direction when it comes to the longer version.

"For example, a lot of players (are) playing only Twenty20 cricket, who I know have a lot of ability and could do well in the Test side. However, at the end of the day, they are not being encouraged, including financially, and as such, do what they have to do."

According to Samuels, one of the reasons for a lack of interest generally by senior players in Test cricket appears to be how they are treated by the West Indies Cricket Board (WICB) as it relates to financial matters.

He said with a changing worldwide cricket landscape, their net worth is being recognised internationally, but regionally, there seems to be reluctance.

This, he said, is evidenced by the new player payment scheme that was negotiated between the regional entity and the West Indies Players Association (WIPA).

"Test cricket is the most important part of our West Indies heritage, but it is also a job for us," commented Samuels.

"I don't think we are being paid particularly well at the moment, as we got a big pay cut recently with virtually little consent on our part.

"Some of us as players agreed in principle for a pay cut with WIPA to help with the paying of first-class cricketers in the regional professional league, but none of us had signed off on the exact percentage.

"WIPA then went literally behind our backs and signed off on close to a 75 per cent match-fee pay cut, and I can tell you none of the players are happy about it."

He added: "Situations like these do not motivate or encourage our senior players to want to play the longest version of the game."

Samuels, who made his Test debut in 2000, has an average of 33.53, including seven centuries and 22 half centuries.