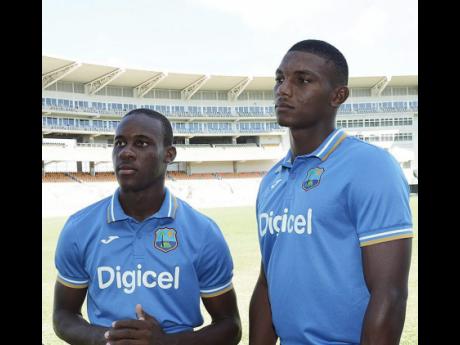 Both coaches are oozing with confidence ahead of today's crucial second day, which is set to bowl off at 10 a.m.

"We have been champions for years, and we are very confident that we can win again as we have a very experienced set of boys and despite some way to go I think the boys will pull through," said Clive Ledgister, head coach of STETHS, who are aiming at their 28th overall title and third in a row.

After having no action on Tuesday's opening day due to overnight showers, which affected the wicket, play started at 11 30 a.m. due to a damp area at the bowler's run-up.

Having been sent to bat, openers Okeemo Farquharson and Jordaine Hill batted cautiously, taking the score to 34 before Farquharson was dismissed for 21, caught off the bowling of spinner Ryan Burnett.

STETHS lost two more wickets before lunch to be 72 for three at the break, with the experienced Shahid Crooks, on 22 and Michael Frew (yet to score) - both of whom represented the West Indies' World champion team at the Under 19 World Cup in Bangladesh - at the crease.

They added 73 runs for the fourth wicket before Crooks was dismissed for 59 (one four, two sixes), with the score at 145.

The defending champions lost two more wickets before the tea break, including that of Frew on the stroke of tea for 49, as they went into the second break at 173 for six. Frew's knock included four fours and two sixes.

Demus McPherson was the top bowler for Vere, claiming five for 35, while Andre Stubbs took two for 36 and Ryan Burnett two for 52.

When Vere started their reply, pacers Andre McCarthy sent back Alrick Townsend for nought with the score on two, before Crooks dismissed Ronald Edwards, also leg before for two.

"We have lost two early wickets, but the players who have made most of the runs for us this season are yet to go to the crease and we are still confident that we can still pull it off," said Turner, who is in his first year at the helm as coach of the team.