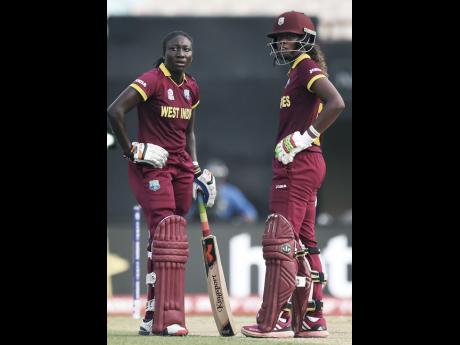 Competitions Officer of the Inter-Secondary Schools Sports Association (ISSA) George Forbes says that while the idea is noble, it is currently not feasible for female cricket to be played at the local high-school level.

This, he says, is as a result of the current lack of interest by high school girls to play the sport, as well as funding, which, he says, will be key if the situation is to be changed.

"It's not feasible for us to play a girl cricket competition, as currently there are few girls and schools who have expressed an interest in playing," stated Forbes. "In fact, I don't know any school that has more than two or three girls who are interested in playing cricket.

"Then there is the matter of funding. We don't even have enough money to play age-group cricket for our boys, much less to take on schoolgirls cricket at the moment," he added.

ISSA currently stages cricket competitions for high school boys at the Under-14, Under-16 and Under-19 levels.

Girls, however, are allowed play in two of these competitions - the Under-14 and Under-16.

But they are barred from participating at the Under-19 levels due to what ISSA expressed as associated "dangers".

Meanwhile, Forbes, who pointed out that Taylor herself was a beneficiary of playing at the Under-14 and Under-16 levels, said his association would be open to supporting a feasibility study to ascertain whether schoolgirl cricket was viable.

"It is the duty and responsibility of the Jamaica Cricket Association (JCA), not ISSA, to do such a feasibility study to determine whether there are enough girls and schools available to participate," he said.

"ISSA acts on the interest of students wanting to play a sport, and, until there is evidence to suggest same, we can't act.

"If after their study and the JCA then comes to us and say we have identified girls in four or five schools who are interested, then it would be something that we would be willing to look into."

Taylor, in the aftermath of West Indies Women ICC World Twenty20 triumph last week, stated: "We need to go into the schools and try to get girls to come out.

"I think we do have girls who are interested. It's just that you don't have anyone to push it."