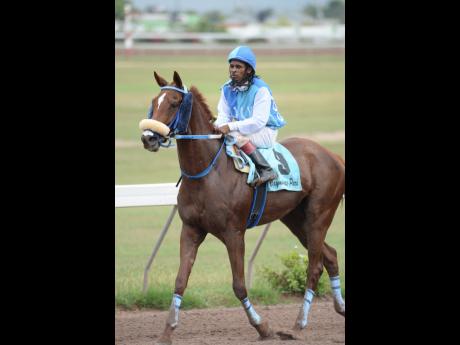 Jermaine Barnaby
Aaron Chatrie heads back to the winners enclose aboard UNBREAKABLE at Caymanas Park earlier this year.

With female apprentice Andree Powell having scored a stunning upset aboard the 99-1 outsider SAMORA in the seventh race at Caymanas Park on Wednesday, both the pick-9 and twilight Super-6 offer carryovers.

The first Super-6 from race two to seven looks tailored for the down-in-class UNBREAKABLE, who failed in his bid to win his fourth consecutive race recently on a $550,000 claiming tag.

DWAYNE STAR, who just failed to catch SHINING LIGHT in the recent Easter Sprint Cup over 1100 metres, should again have the measure of the speedy ACTION MAN, who was third in that race, over the straight five course, to be contested by eight overnight allowance horses. Three-time champion jockey Dane Nelson will now ride DWAYNE STAR for in-form trainer Patrick Lynch.

WARTIME, the mount of the improving apprentice Jerome Innis, caught the eye in running last time out and should win the fourth race over 14000 metres for maiden three-year-olds, this for female trainer Margaret Parchment.

Briefly, the next three races should be won by PRINCESS STATISTIC (Steadman up); DIYFUNCTTIONAL (Omar Walker up); and GENUINE ARTICLE (Wesley Henry) in the seventh.

(7) UNGENUINE ARTICLE/QUEEN OF THE TOWN