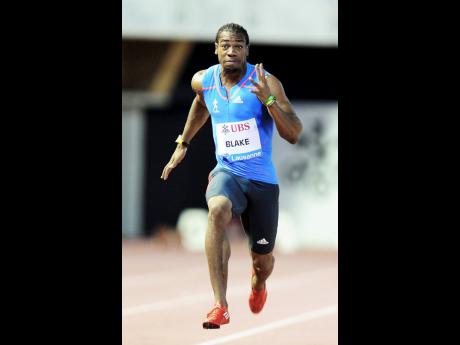 Yohan Blake, the joint second fastest man ever, praised God, thanked his coach and friends who stood by him for his return to world-beating form which saw him sizzle to 9.95 seconds at the MVP Classic inside the National Stadium, Saturday night.

Blake, who was considered down with hamstring injury over a two-year period, proved not to be out. The 2011 IAAF World Champion and 2012 London Olympics double silver medallist lit up a small National Stadium crowd in his first 100-metre race of the season.

“I felt really good from the relay and I said to myself and my friend I am gonna get a nine something or the world lead,” he said following his win.

Many pundits, neutrals and supporters had hoped Blake could get back to or replicate some of his fine sprinting of years gone by, including Missionaries of the Poor’s founder Father Richard Ho-Lung, who recently admitted to The Gleaner that he was a fan of the athlete and “praying for Blake to get back to his best”.

On Saturday, an emotional Blake thanked God for helping him through the tough times, adding that he wants to be referred to as 'The Beast’ no more.

Twenty-six-year-old Blake said he does not have any set expectations this year, just to compete and return to his best.

“I have to give God thanks again my coach has been working really hard on getting the leg up to scratch and right now its firing, my first race in the 100m and running like that it’s going to be good,” said Blake.

Meanwhile, his manger Cubie Seegobin said Blake could compete in Germany on May 14, then the RACERS Grand Prix June 11, and Adidas Grand Prix in Boston on June 18 to help him get into top shape for the Jamaican Olympic Trials at the end of June.